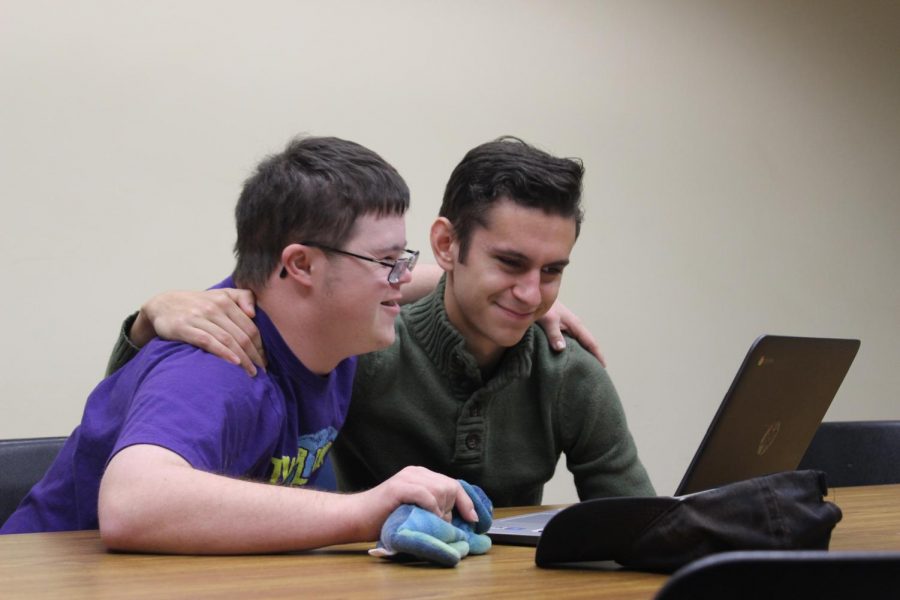 In the library first period, the melodies of The Beatles’ “Let it Be” or Elvis Presley’s “Can’t Help Falling in Love” can be heard coming from the computer lab.

The source of that sound can be traced to senior and peer coach Henry Vickers and junior Nick Hawley, singing along together to whatever song is the order of the day.

After completing tasks around the library such as reshelving books, filling printers and collecting lost and found items, these impromptu karaoke sessions are a favorite activity of theirs.

“Nick likes to sing, and I think it’s fun to sing. I don’t think I’m talented, but that’s not the point,” Vickers said. “I enjoy singing with him.”

Singing with Vickers is only a small part of Hawley’s day. He is an active member of the school community who spent a year on ASB, enjoys photography and runs alongside Vickers on the cross country team.

Vickers said that he has benefitted from the time he has spent with Hawley, both in class and out.

“I love working with Nick,” Vickers said. “It does require a lot of patience, and so I think I’ve exercised that and I’ve definitely gotten better. There’s just a lot of subtle nuances to learn, and I think it’s really helped me with interpersonal skills.”

Working together over the course of the year, Vickers said he and Hawley have grown close.

“I have such a unique relationship [with Nick],” Vickers said. “I have a best friend and a brother, and those are all great people to have in your life, but there’s something completely different between me and Nick. It’s hard to explain. I don’t want to claim that I’m responsible for him because he can do so much on his own, and honestly we work together. He helps me and I help him. It’s really unique, so I enjoy it.”