Suicide awareness and prevention: What can we do better? 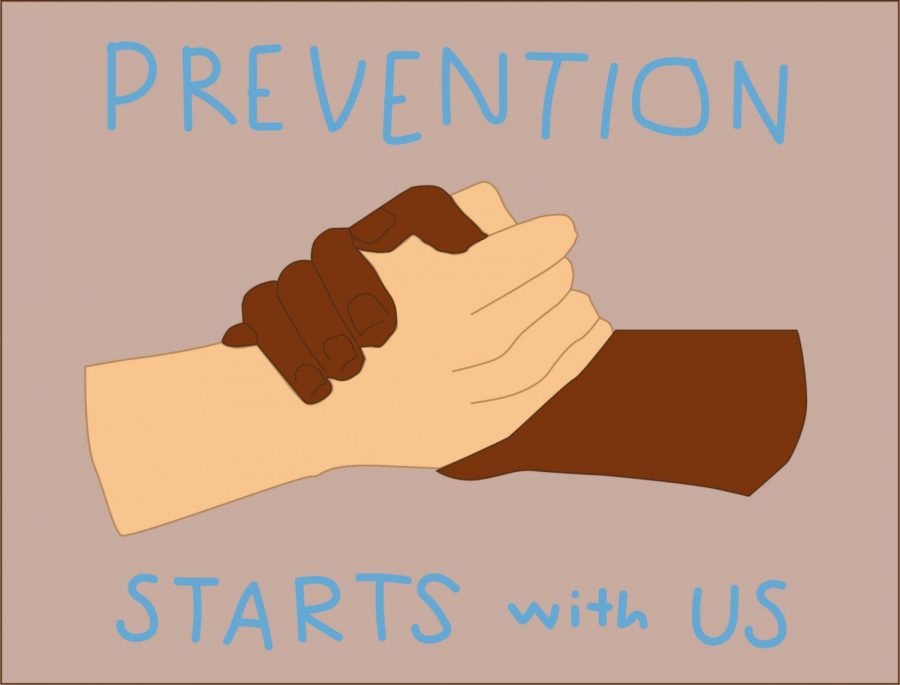 The CDC classifies suicide as 100% preventable. The best way to avoid it is by standing together. Art by Rory Knettles.

Before you proceed with this article, please be aware that the overarching theme is suicide. If you are sensitive to or provoked by mentions of suicide, we suggest that you not continue reading. Thank you.

Every year, 50,000 people die from suicide in the United States, according to the American Psychological Association. Their 2017 study of teen suicide found that despite being almost entirely preventable, suicide is the 10th leading cause of death for young people across the nation. In Washington, it’s the second leading cause of death. In 2018, 20% of 10th graders and 19% of 12th graders considered committing suicide, 15% of each grade felt as if they did not have someone to turn to.

Some signs that someone may be considering suicide include changes in attitude (either positive or negative), the act of giving away possessions, recent traumatic events or talking about death or dying. Every person is different, however, so signs can and will be unique to each person.

After recognizing such signs in one of her friends, Kaitlyn Smith* said that she made sure to constantly check in. Smith said she reminded her friend of how much she mattered to her and to others and of how loved she is by all. Smith said that reaching out for help is the best thing a person can do for themself because someone is always going to be there if you ask.

“A way, I think, to prevent others from committing suicide is by encouraging them to tell [a trusted adult] or close friends so that you can always have someone to talk to when needed,” Smith said.

She also said that because asking for help isn’t always a viable option, simply checking in on your friends is a good alternative to better understand what they may be going through.

For a lot of people, prevention starts before suicidal thoughts occur. Senior Gillian Sparks said that people should stop treating suicide and mental health like a joke. She said that humor is used as a way to mask vulnerability and cites it as a generational issue rather than an individual one.

“[This generation is] so obsessed with fitting in and following trends that we neglect the importance of vulnerability and feelings and just treat self-deprecation and ironically-told traumatic experiences as accessories to our sense of humor,” Sparks said. “If people are actually going to be able to feel comfortable sharing their stories without fearing judgment, we need to take people more seriously.”

A Stanford University study published in 2011 found that positive, optimistic humor can be used as a coping mechanism because it forces a change in perspective. But, it should be used in conjunction with vulnerability and discussions about what you’re going through. Researcher Dr. Brene Brown describes vulnerability as something that does not come naturally to most people. It actually may be seen as a sign of weakness, she said.

“We emotionally ‘armor up’ each morning when we face the day to avoid feeling shame, anxiety, uncertainty, and fear. The particular armor changes from person to person, but it usually revolves around one of three methods: striving for perfection, numbing out, or disrupting joyful moments by ‘dress rehearsing tragedy’ and imagining all the ways that things could go wrong,” Brown said, “What most of us fail to understand…is that vulnerability is also the cradle of the emotions and experiences that we crave, vulnerability is the birthplace of love, belonging, joy, courage, empathy, and creativity.”

Discovering that you can trust people to accept you is a big part of creating a sense of belonging, but people can only accept you if they know who you are, which can only come with accepting emotions and expressing your thoughts, she said. Learning how to healthily cope with those thoughts is the biggest obstacle to preventing suicide, Rachel Anthony* said.

“I think we need to have more open and larger support groups. In schools, mental health awareness should be a must,” Anthony said. “It should be an obligated course and [we should] participate in activities to learn more about the topic, so that people can be more open-minded and have a more open heart towards others.”

Suicide and mental health are topics that have been danced around in the past, but being open to conversation with peers is the best way to prevent unnecessary deaths, Anthony said. By recognizing suicidal tendencies and caring for people before suicidal thoughts even occur, the number lives lost to suicide can drastically reduce.

“Listen intently and without judgment. Ask open-ended questions, i.e. those that cannot be answered with a simple yes or no. Resist the urge to offer quick fixes or solutions to their challenges, which tends to shut down further dialog,” Stanford researchers said. “Validate and support their feelings. It can start simply by asking, ‘Are you okay?’”