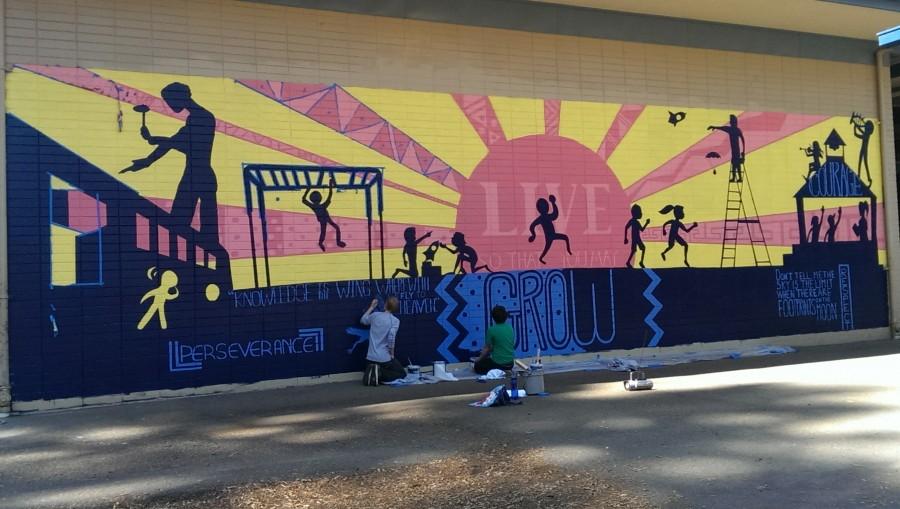 Seniors Anders Ledell and Debbie Clauson work on the lower half of the mural. They offered up time from their spring break to paint.

Over spring break, a group of students began work on a mural at Crystal Springs Elementary school.

They were first approached about the project by Crystal Springs’ sixth grade teacher Lori Hardwick at the end of last year. The students listened to her talk them through the basics of what she described as an unfinished mural that needed completion. The project immediately intrigued them. However, despite the communication, they really had no idea what to expect from the mural.

“We got there and we saw a mural which looked half done. Well, done to the point where you can’t start over and really improvise but not done enough to see what the artist’s vision was,” senior Anders Ledell, the designer of the new mural, said.

Every year the sixth graders at Crystal Springs create a project which improves the community of the school for a future generation, and a class ten years ago chose to paint a mural. The original mural had been painted by an artist named Bill Ford, the father of a student in that class. It was meant to show a timeline of elementary school life and incorporated the ideas of that years’ sixth grade class. However, the mural was never finished.

The group of students originally intended to finish Ford’s original design, but the design was too busy and overcrowded because Ford wanted to show all the ideas proposed by the original students. This, and a lack of access to the original paint colors, led to the decision to redesign the mural.

“In the spirit of Bill Ford, I wanted to show a transition with the design that I made, that my co-organizers helped me with. I looked at his mural for some inspiration for what the kids wanted,” Ledell said.

The mural is 13-feet high and 46-feet wide, far larger than anything any of the students working on the project have painted before.

“I’ve never painted anything on this big of a scale. I think one of my favorite parts was painting and then standing back and looking at it as a whole,” junior Anna Bloch said.

Bloch underlines one of the  main reasons the students are painting the mural. It is a piece of art. And, as the sixth graders decided ten years ago, it is also meant to improve the school community.

“May Pelto, the principal, has mentioned to me on one or two occasions that the students of the school have this feeling that the facilities of the school are getting run down,” Ledell said. “She was really excited for this because it’s kind of putting a new lease on the life of the school. That’s why art is important to the community, because it brings life back into it.”

Although the day of completion cannot be determined for sure, the mural is estimated to be done soon after this school year ends.