For the love of language 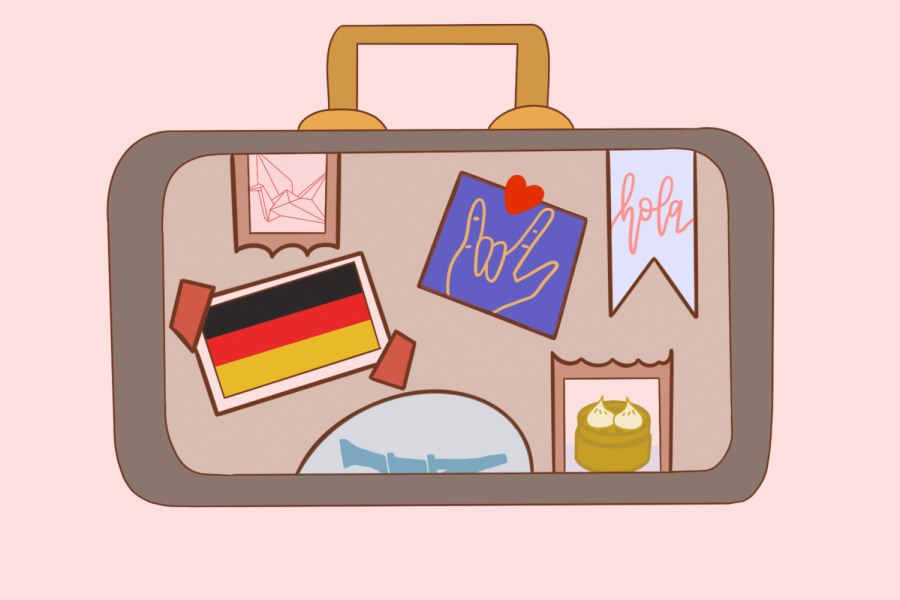 German
Under the guidance of teacher Susanne Kanning, students taking German will learn the language through immersive experiences, such as traveling and attending an after-school club. Notably, German is the only language at Inglemoor to offer an immersion camp during the summer to students who cannot travel to Germany. Kanning said that such experiences are an important part of the learning process.

“[The camp] is in the state of Washington. It’s all in German, and it gives as close of a German immersion experience we can get right here in the US,” Kanning said. “I think that the more you are listening to and the more you’re immersed in the language, the more you’re going to learn.”

Aside from planning activities outside of school, Kanning said she also strives to enhance the learning process inside the classroom by creating a positive atmosphere.

“One of my favorite things to do is to teach through games,” she said. “Anytime a student is having fun, that is going to lend itself to learning.”

Kanning was inspired to pursue a career in teaching German after her time as an exchange student in Germany. Although initially a French student, she found a fascination with the language and country during her time there.

“I loved everything about it,” Kanning said. “I loved the country, the people, the culture and the language. I wanted to share that and pass that on to students.”

Kanning has taught at Inglemoor since 1990 and said that her identity as Frau (which means “Mrs.” in German) Kanning and the memories she’s made with her students have become big parts of her life.

“ I love when my students aren’t afraid to try to say something and when they make a mistake, and we can laugh about it,” she said. “I love those moments when everybody’s involved and having fun, and you can just feel it in the room as we’re working on mastering this language.”
By Margaret He

Japanese
For any students with an interest in Japan and its culture, teachers Noriko Nasu and Emiko Kamitsuna provide an opportunity to explore the language in unique ways. From planning a Japanese-style field day to cooking Japanese cuisine, students will learn grammar and vocabulary while engaged in cultural activities.

In terms of curriculum, Nasu said that, above-all, she aims to focus on teaching her students how to communicate.

“When I learned English, my school in Japan, they focused on grammar, reading and  writing a lot. As a result, I didn’t learn how to communicate,” Nasu said. “My focus is communication [through] talking and speaking.”

Kamitsuna said that because English speakers often have a hard time learning Japanese, she incorporates cultural activities in class to motivate her students.

“The Japanese language is [difficult] because there are so many different writing styles,” Kamitsuna said. “[I want to make sure] that they enjoy learning Japanese, and I hope that they have some kind of connection with the culture.”

One of the many cultural immersion activities that the Japanese department organizes is a visit from two high schools in Japan every year.

“My students actually get to meet high school students who speak [Japanese],” Nasu said. “They experience ways to use the language and communicate.”

As part of the immersion experience, Japanese students also take field trips every other year to the Seattle center to visit the Sakura Matsuri, or Cherry Blossom Festival, as well as to the International District to places such Uwajimaya, a Japanese grocery store.

Incorporating such cultural experiences has inspired a love of learning in both teachers.

“[I love] that I can introduce my culture and that it’s totally different than American culture.” Kamitsuna said. “[Teaching here has taught me] that even I don’t know a lot of things about my own culture.”
By Margaret He

French
French teacher Gary de Gorgue chose French to fulfill his language requirement in high school simply because his brother had taken German. This small and random decision has since shaped his life.

De Gorgue said his love for the language intensified when he visited France. From the books he reads to his students’ insights, the amount he learns is what he said he enjoys the most about teaching French.

“What really made me want to teach is when I went over to France for the first time right after high school, and I really enjoyed it. The people were wonderful, and I had a really good time being over there, and so then I realized that I really like this,” de Gorgue said.

Additionally, his teacher from college taught him how to follow his interests. De Gorgue said they shaped his life and career more than anything: he wants to pass this inspiration on to his students. His teachers didn’t teach this to him deliberately, however.

“I just think it was sort of osmosis, you know? If you have ever had a teacher that’s excited about their subject, it kind of rubs off on you a little bit. Even if the subject is not particularly interesting, they can make it interesting. So, that sort of behavior rubbed off on me,” de Gorgue said.

To make his class interesting, de Gorgue said he tries to make students feel comfortable to speak their mind in class and participate by allowing their personal backgrounds and experiences to influence the class dynamic.

“When we write our vocabulary, students write it in French and in English, but I give them extra credit if they write it in a third language, perhaps the language they speak at home or a legacy language of their family or just another language that they know,” de Gorgue said.

Teaching French, de Gorgue said, has allowed him to learn many new things from his students and about the people, world and language in general.

“When you teach, you have to keep yourself up to date on trends and changes in the language and culture to be effective. So … it has taught me a ton,” de Gorgue said. “The students have their own stories, and you learn a lot from those stories as a teacher.”

ASL
From playing telephone to planning fundraisers to help those in the deaf community, American Sign Language (ASL) teacher Renée Boulac has learned effective teaching plans through trial and error. She used to work with deaf children in Seattle and Bellevue, where she taught ASL and Signing Exact English. After the program in the Bellevue School District was canceled, she decided to teach ASL at Inglemoor High School, a position she said she has loved so far.

“I enjoy teaching high school students American Sign Language. I love the atmosphere and enjoy the students, and I try to create a positive and encouraging atmosphere,” Boulac said.

When she first started teaching, there was an Interpreter Training Program (ITP) for the deaf at Seattle Central College, where many of her students could participate in activities and attend plays to become more involved with the community and the culture. Now that the ITP has been cancelled, Boulac said she has struggled to provide her students with engaging opportunities to become more connected.

“We try to do fundraisers to help abused deaf women and people who are fighting a genetic deaf/blind condition called Usher Syndrome. During Viking Day, we will have an activity to help raise money for Usher Syndrome,” Boulac said.

To compensate, Boulac said she tries to encourage her students to sign in and out of the classroom to give them as much practice as possible. She said that the games she organizes are supposed to help encourage signing instead of talking.

“We play games that are similar to hearing-people games such as the ‘Telephone Game.’ The first person in line thinks of an ASL sentence, signs the sentence to the next person and so on.  If the students do not sign clearly, then the original message is lost in the process.We [also] play [the] Elephant Game to help students develop Visual Acuity which is important in ASL and other games,” Boulac said.

Boulac said some misconceptions and mistakes students learning ASL may make is talking while they are signing—which is considered very rude within the deaf community— and assuming that ASL has the same grammatical structure as English.

“The language was created by deaf people who could not hear the spoken language. The grammar is very different,” Boulac said.

In fact, there are about 300 sign languages around the world, including ASL, which is only used in Canada and the United States.

“I believe that learning more than one language is important. It opens doors for different opportunities. Also, there are many languages in Seattle, King County alone,” Boulac said. “Learning one language could easily open doors to learn more languages. It is so much fun.”
By Aditi Jain

Spanish
Growing up in Argentina, Spanish teacher Ruth Stremiz’s favorite book series was “The Chronicles of Narnia.” When learning English, she said that she later discovered that the Spanish translation was very poor.

“That kind of moved me to look more into languages, which took me to translations of old Greek and Latin poetry,” Stremiz said. “I, then, became a translator of English while I was still a teacher because I enjoyed doing that.”

Despite not being a translator anymore, she works with students on other activities that are representative of the culture of Spanish-speaking countries. One of these activities includes watching telenovelas.

After teaching Spanish Literature in Argentina for 20 years, Stremiz moved to the United States.

“The closest thing was to teach Spanish,” Stremiz said. “It is my first language, and I enjoy seeing the students trying to learn it and to use it because I really believe that it is a very important language in the States.”

On the other hand, Spanish teacher Rebecca Lewis did not grow up speaking Spanish. With her French-Canadian background from her mother’s side, she said she was reluctant to choose Spanish in her freshman year of high school.

“I was going to actually switch out my sophomore year to French,” Lewis said. “Between my freshman and sophomore year in high school, I went to Italy. Then I was like, ‘No, I want to keep what I started.’”

Before she even started attending college, Lewis said she knew she was going to be a teacher. In her time at Western Washington University, Lewis said she thought that she would teach drama, but she ultimately chose to get a bachelor’s degree in Spanish.

“There was never a quarter in my entire college experience that I didn’t have at least one Spanish class,” Lewis said. “I took them all because I just loved everything about it.”

Lewis said that as a teacher, her favorite moments are when students take risks when speaking.

“[Learning a language] means you have to surrender a lot of your perfectionism, and you have to be silly and be willing to get messy,” Lewis said. “I love it when I can share that with kids.”
By Naomi Nam