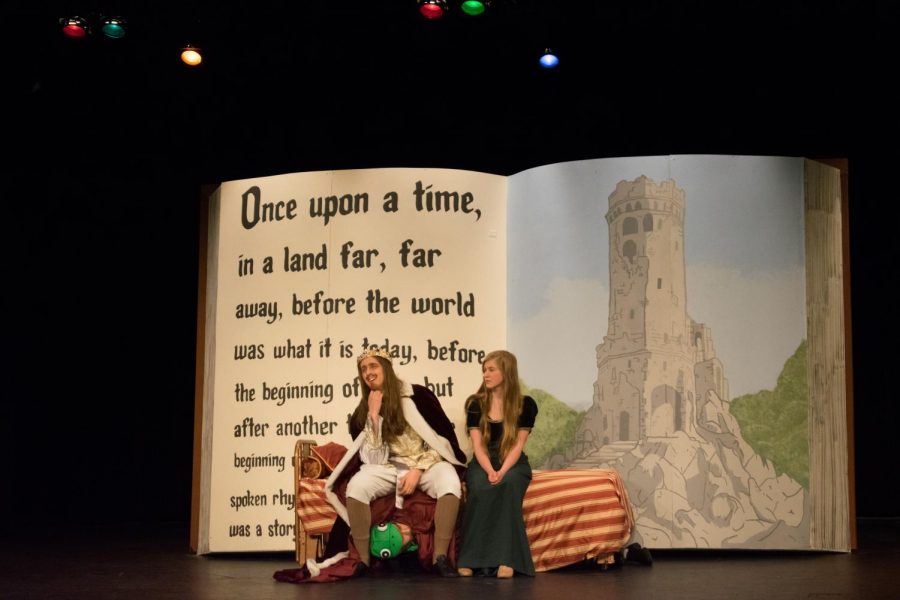 Seniors Ya’am Zahavy Mittelman and Owain Waszak and sophomore Gabi Kotwicki (left to right) play the King, the Frog Prince and the Princess respectively. The King gives his daughter romantic advice while the Frog Prince hides underneath the bed on Jan. 25. Photo by Cathy Zhao

The last show was on Feb. 1; it was very much a success, considering the setbacks in production. The show is a mashup of all of the original “Brothers Grimm” fairy tales, like Little Red Cap, Hansel and Gretel and Cinderella, but they’re told incorrectly. Combined with plenty of audience interaction, the result is a production filled with comedy and confusion, Zahavy-Mittelman said.

“The whole idea of the show is that the audience is questioning whether or not what’s happening is in the script. That’s just how silly it is, and it’s really fun; it’s worth a watch,” junior and assistant director Ariana Riley said.

Valhalla Players generally put on three shows per school year. However, the situation was a bit different in this case. In the middle of preparation for the show, director Kevin Bliss had to leave his role. The students continued rehearsing and preparing for the play while the school looked for a new teacher to fill the role for the spring musical, “The Little Mermaid.”

The new teacher, Heidi Jensen, was not hired until Jan. 22 and didn’t start the job until after the end of “The Brothers Grimm Spectaculathon’s” run.

Without a director, some of the students were thrown into new positions, including assistant director.

“Originally, I was just supposed to be doing sound, which is so much more simple than directing, and I kind of was thrown into the position; I hadn’t even read the script when [Bliss] told me he wanted me to just take over,” Riley said.

According to Riley, she received help from Shileah Corey, who is the costumer for the show; Corey has past directing experience.

“In this process, it’s been hectic for this show to be put together, but because we’re so student-based, we’re able to pull it off,” Zahavy-Mittelman said.

Senior and assistant stage manager Ally Ellett said that rehearsals went fairly smoothly during “Purgatory” and “Hell Week,” which are nicknames for the last two weeks and last week leading up to the show, respectively.

“I’m just trying to figure out what all needs to get done—making sure people do what they need to do,” Ellett said.

Riley said the show’s success is because of their teamwork.

“It’s been made easy with these students because they have such motivation and respect for one another,” Riley said. “And those are key components of putting a show together—just everyone wanting the same thing and everyone being willing to head in the same direction and just be time-efficient and get the job done.”