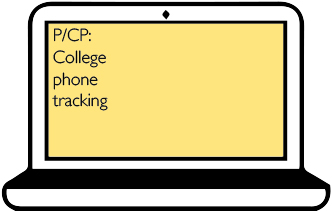 Pro:
Throughout the nation, dozens of colleges are starting to track their student’s phones, using an app called SpotterEDU. The primary goal is to increase student attendance, thereby encouraging students to engage.

The school’s faculty has access to the students’ whereabouts,  attendance rates and more. When student comes to class, their attendance points are boosted. When they don’t, an email is sent to the student’s professor. A follow-up email and meeting with the professor may be requested.

Tracking students promotes an increase in academic engagement. For example, Syracuse University, in New York has reported a higher attendance rate since they implemented the system. Some of the university’s previously sparse classes are now over 90% full.

Tracking students also encourages them to stay on top of schoolwork. The app monitors factors such as whether or not students visit places that contribute to a more well-rounded college experience, such as the campus library. Because students are being observed, they now have the motivation to stay on top of their academic tasks, or just staying active and healthy in general.

From a less personal perspective, tracking phones in the education system makes it easy to recognize patterns in certain groups of students. Watching students on scholarship funds, for example, is a way to ensure that limited money is not being wasted.

In general, tracking students can promote a better academic environment. Showing up and being committed are important skills to have

for the future. A tracking system not only motivates students to go to class but also inspires them to stay and participate as well. If they don’t come to class, professors will drop the student’s grade.

Observing students means at-risk behaviors are detected more quickly. If a regularly active student stays in their dorm the whole week, the system could pick up a sign that something is wrong, alerting staff to check on them. Without this tracking system, the student’s problem most likely would go unnoticed. Moreover, with the increased possibility of threats on campus, tracking student locations helps to ensure that every student is accounted for and away from danger.

Admittedly, tracking students does raise some safety concerns. SpotterEDU’s data may be considered a violation of student’s privacy. However, students can opt out of the program completely. By opting out, however, students are missing out on virtual awards, points and recognition from their professors.

The growing role of technology in people’s lives today and in the future makes it harder than ever to achieve a fully isolated life—and most people don’t seek one. With Google Homes and Alexa answering people’s every need, tracking and observing people is not a new concept. In the education system, tracking students phones simply capitalizes on the students’ use of technology to help them succeed. The app helps boost attendance, increase safety, and help students thrive in an academic environment. SpotterEDU keeps students more responsible and build strong habits  for the next phase of the unknown future after college.
By Priya Annapureddy

Con:
As tracking technology grows more advanced, there has been a simultaneous increase in colleges employing cell phone tracking technology. The way this technology tracks  students is complex: bluetooth sensors are placed around campus. In order to use the school WiFi, students are required to download an app like SpotterEDU that tracks their movements, sometimes logging 6,000 location points per student per day. This technology on college campuses can be taken too far and should be utilized carefully.

According to the Washington Post, SpotterEDU and Degree Analytics go further than solely tracking attendance. They allow administrators to split students into groups based on race or where they live. The app also logs habits, such as timing how long students are in the bathroom or how much time students spend studying at the library. The sheer amount of data collected is alarming, and one can’t help but wonder why schools would need this much information or what they do with it.

The biggest problem with cell phone tracking is that it is not necessary. Traditional attendance-taking methods are perfectly adequate and pose almost no problems. Those who argue that tracking systems encourage students to come to class are forgetting a crucial point: college students are adults who pay for  their classes. If students choose not to come to class, then that is their choice – the school loses nothing. There are more effective ways to encourage attendance, such as through graded homework, tests and student-teacher conferences for chronic truancy. Subjecting adults to such intrusive technology for the sake of keeping them in class is going too far and can lead to a learning environment based on distrust and resentment, straining the relationship between students and administrators.

Degree Analytics claims that the data collected through cell phone tracking can be used to monitor mental health. Proponents of this technology claim that if a student doesn’t log in at the cafeteria regularly, it could be evidence of an eating disorder. However, the data collected by the app cannot be considered conclusive; there can be many reasons students aren’t eating in the cafeteria, and perhaps they are not all related to eating disorders. Furthermore, stress and anxiety may actually increase if students feel like they are constantly being watched or could be called in for an evaluation at anytime.

In their terms of data usage, SpotterEDU itself admits that the data collected is not “accurate, complete, correct, adequate, useful, timely, reliable or otherwise.”

Technology is inherently unreliable. Students will no doubt remember the technology breach at the beginning of the year when Northshore School District’s servers were hacked. It’s easy to imagine that kind of breach at a school that relies on SpotterEDU and other means of tracking. A hack could expose the locations, grades, classes and habits of thousands of students. This is a massive safety violation that could endanger students anywhere on campus.

Cell phone tracking technology on college campuses collects far too much data and overall creates more problems than it solves. Schools should bear in mind the negative repercussions this technology could bring and refrain from using it.
By Minita Layal