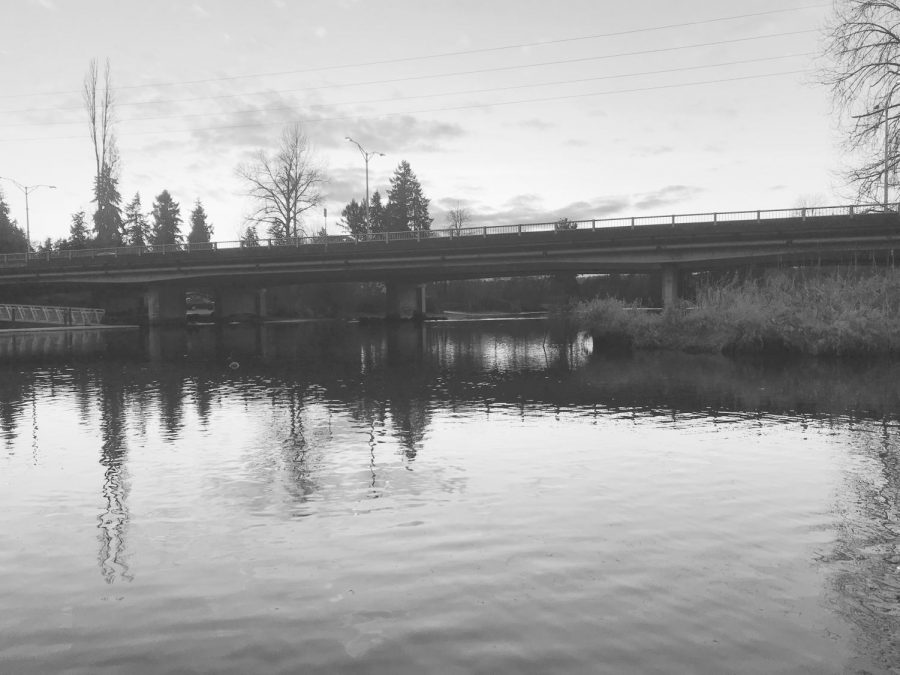 Cars cross the West Sammamish River Bridge at sunset on Feb. 3, 2020. The bridge is set to be demolished during the second phase of the project in 2021. Photo by Sonya Sheptunov

The project entails a three-part process, City of Kenmore engineer John Vicente said to the Bothell-Kenmore Reporter. During the first phase, construction workers will first remove the pedestrian walkway and begin preparatory construction to diverge traffic flow, including creating access roads, temporary road trestles and the western half of the bridge. This first phase is slated to be completed in 2020. The second phase involves a diversion of traffic to the new, west-side bridge while the old bridge is demolished. The third and final phase of the entire project will involve moving southbound traffic to other travel lanes and is slated for completion by 2022.

According to the Bridge Project FAQ page, plans to upgrade the bridge involve replacing the handrail to match the southbound bridge, adding new street lights and a new traffic barrier along the west edge.

The Kenmore City Council emphasizes that the current bridge is not unsafe—the original bridge was built in 1938 and is now classified as “structurally deficient.” Past action entailed placing load restrictions on trucks that can cross the bridge in 2014. According to the Kenmore Municipal Code 12.20.050, the 2014 limit fines those driving any three-axle trucks bearing an excess of 16 tons, five-axle vehicles bearing an excess of 25 tons and six-axle vehicles bearing an excess of 27 tons. These limits were imposed to extend the lifespan of the bridge by reducing cracking and corrosion caused by crossing of heavy loads.

While the majority of heavier construction like paving and striping will be restricted to nighttime, frequent southbound drivers will experience significant delays during the project.

“I don’t really think we can do much. The most we can tell people is, ‘Give yourself plenty of time. Maybe plan alternative routes, alternative ideas of what to do,’” Vicente said to the Bothell-Kenmore Reporter.

The City of Kenmore website said that there will be an informational drop-in session at the Kenmore Hangar from 8 a.m. to 5 p.m. on Wednesday, Feb. 12. Those interested can drop by to learn more about the project, ask staff questions and view project designs.