Disney+: your plus one for the holiday season 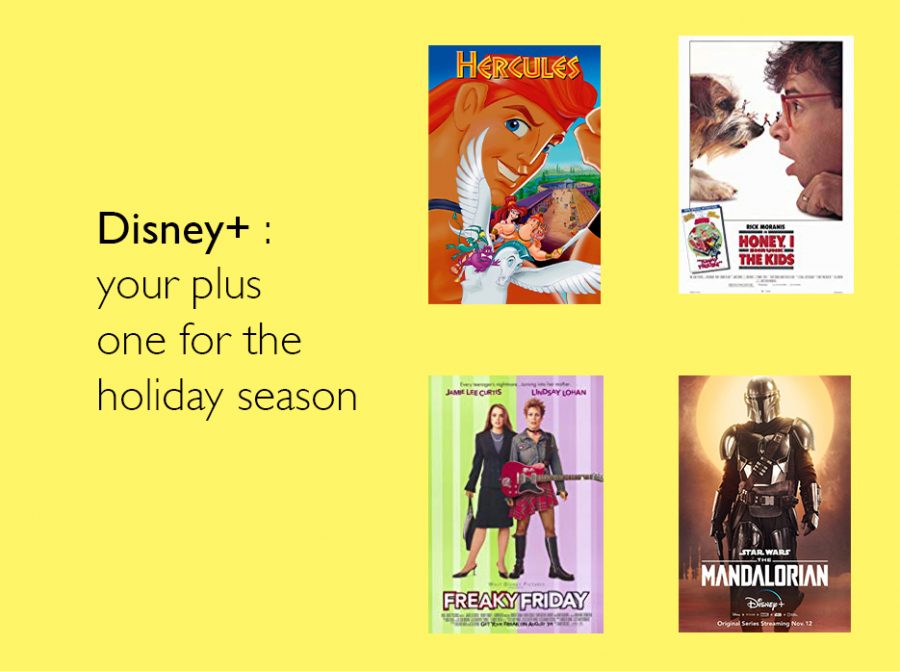 Disney+ is the perfect application for all ages to enjoy nostalgic and upcoming films and shows. Art by Rahima Baluch

When Disney+ launched last November after months of anxious waiting, people were ecstatic. Finally, all of Disney would be on one platform. Hours and hours of animations and throwbacks and originals would be accessible for excited fingertips. Within its first day, over 10 million people signed up.  If you want unlimited access to Disney favorites, Disney+ is the cheapest way to meet your needs. It is the perfect place to catch up on Disney Channel favorites and rewatch some of your Disney childhood classics. With shows dating back to the 1930s, there is something for everyone to watch. The quantity of selections available on the platform is startling. When scrolling through Disney+, it is impossible not to feel excitement, nostalgia and surprise as you see all your favorites in one place.

Beyond its own Disney content, Disney+ includes wide selections from National Geographic, Lucasfilm (Star Wars), Marvel Studios and Pixar. In addition, Disney movies playing in theaters will be on the platform after release. Titles like Avengers: Endgame and Captain Marvel are already available.

In some ways, the number of selections may be too vast. The service can get hard to navigate at times, and not all titles are organized on one page. In each section, more movies, shows and series show up, which can get overwhelming for the user.

However, all of Disney’s content, including Disney’s vault of animated classics (“Lion King,” “Dumbo,” “Lady and the Tramp,” etc.) will be taken off Netflix and streamed on the service. Most selections have already gone through this process. Shows cannot be played on Disney+ until they leave their current platforms, which is irritating, especially if you have to wait another year for your favorite selections.

Like Netflix, Disney+ has exclusive originals on its platform. Within weeks of its launch, pictures of Baby Yoda from the new show The Mandalorian had taken over the internet. Episodes of Mandalorian and other Disney+ shows are released weekly, contrasting Netflix’s common strategy of giving viewers a full season at a time. Soon, original shows connected to the Marvel Cinematic Universe (MCU) will join the platform. This will include shows such as “Loki,” “Falcon and the Winter Soldier,” “Hawkeye.” In addition to furthering storylines and universes, Disney+ originals will soon include more documentaries, live-action shows and animations.

The future of Disney and Disney+ seems bright and boundless. All of its content is PG-13 or under, makes it irresistible to all parents with younger children. Getting Disney+ is also quite affordable.

At its price point, getting Disney+ is a no brainer. Even older audiences can appreciate the nostalgia of Disney content. In addition to giving you entertainment over the holiday break, perhaps the greatest thing about Disney+ is unlimited and complete access to Baby Yoda.