The girls soccer team secured a record-breaking 4th place finish on Saturday Nov. 23 in the Kingco 4A division. 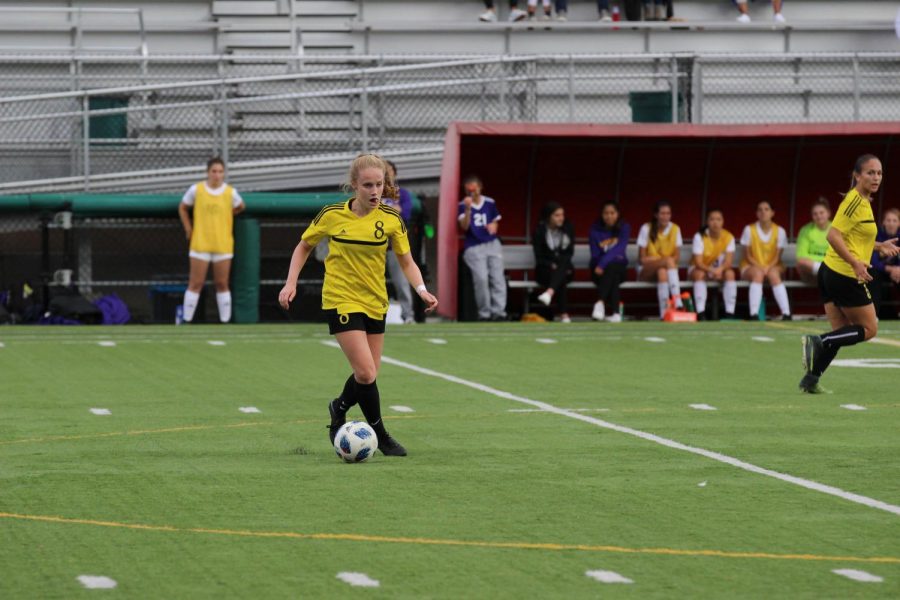 Senior Katelyn Laccinole on the field at one of team's games. Photo by Mia Tavares

The girls soccer team secured a record-breaking 4th place finish on Saturday Nov. 23 in the Kingco 4A division. The team concluded the season with a district record of 8 wins, 0 losses and 1 tie in league games and overall 14 wins, 3 losses and 3 ties.

After defeating Union High School in the quarterfinals of the 2019 Girls Soccer State Championships, the team progressed to the semifinals. The semifinal game against Auburn Riverside High School resulted in a narrow 1 to 0 loss for the Vikings.

The team went on to play in the consolation match against Gonzaga Preparatory School for third place. The final score was 1 to 2, Gonzaga with the latter. Despite the result, it remains a season noted for its victories and vast improvements.

“Our team this year has worked really hard on and off the field. Having practice every day for three months wasn’t easy, but we were motivated by the fact that we were doing so well in [the] league, and we knew we had a chance of going far,” junior and goalkeeper Eden Iyall said.

The team proved their dedication and successful work ethic through achieving both Inglemoor’s first-time girls soccer undefeated record and a myriad of district titles. This year, the team qualified for six postseason games, whereas in years past the team had only qualified for up to three.

“When I look back on the season, it is very surreal to see how far we got, especially because of how underrated we were in the beginning,” junior and center-mid Joie Christensen said.

Christensen said the title was both hard-earned and unexpected.

“Inglemoor girls soccer has never been a powerhouse and we’ve always fought hard to even make it to playoffs, making our progress even more exciting,” she said.

The team is now the first Inglemoor girls soccer team to progress to the semifinals of the Girls Soccer State Championships. However, this achievement wasn’t met only with jubilance.

“State was definitely bittersweet. We were proud that we made it there, but also really sad because we knew deep down we could have won the whole thing,” Christensen said. “It was rough to get so close but not take state. But at the same time, we are all very proud of each other.”

Ultimately, both Iyall and Christensen said they are proud of the results.

“After we lost in state, [coach] Nelke told us we had won more games this season than the last four years combined,” Iyall said.“That really put into perspective how much this team has improved.”