As the transition from fall to winter sports is underway, Viking athletes rely on new athletic trainer Samantha Noe for medical support. 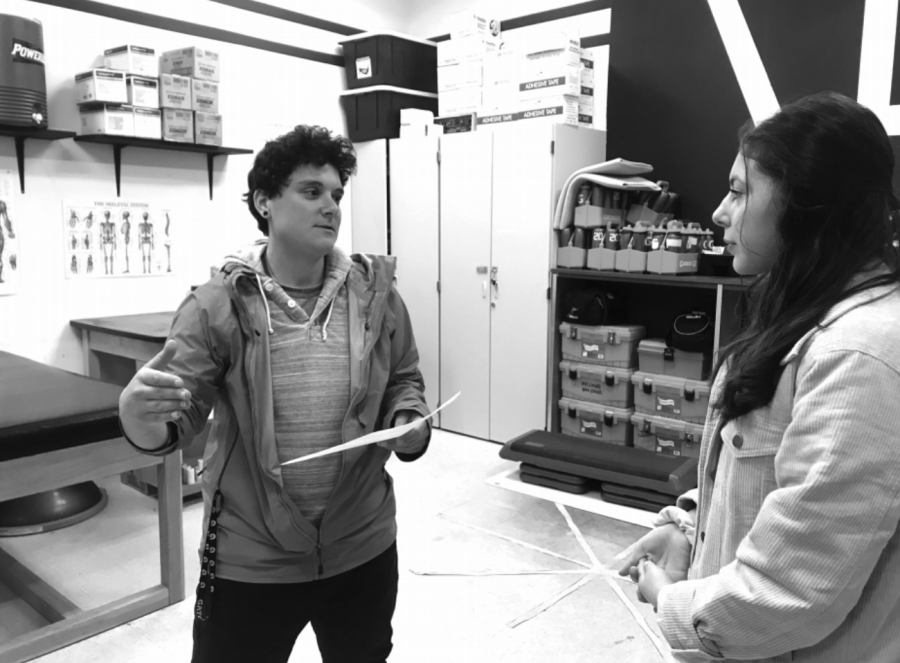 Noe stands in her office inside the weightroom as the football team works out; she has just finished helping a student. "Those guys can get pretty noisy out there," Noe said. Photo by Aditi Jain

As the transition from fall to winter sports is underway, Viking athletes rely on new athletic trainer Samantha Noe for medical support. Noe has worked at Inglemoor since February 2019 and lived in Kenmore for more than two years.

Noe was a student athlete herself, playing high school ice hockey in Quabbin, Massachusetts and tennis at Rochester Tech in upstate New York. Today, Noe participates in Olympic-style weightlifting and is a trainer for high school students. Noe said her athletic background was part of the reason she wanted to be a trainer.

“When I played sports in college and in high school, I was always one of those kids getting injured. I got to know the athletic trainers, and they taught me everything I know,” Noe said.

In addition to being an athletic trainer, Noe was involved in a variety of fields. Noe worked at Proliance Orthopedics alongside orthopedic surgeons, and she started her own cash-based business after graduate school.

“I was coaching people lifting weights part time, and then doing individual one-on-one sessions to help people with their injuries,” Noe said.

After trying several jobs in her earlier years, Noe decided to come to Inglemoor and work with students. She said the best part about being an athletic trainer is forming relationships with the players.

“Players aren’t just patients to me. They are people I can get to know and follow through their high school career,” Noe said.

Noe’s office is located in the weight room, where students go to receive assistance. Since Noe works on campus, she interacts with students more often. Noe said she wants the role of a school trainer to change.

“I want to spend a lot more time actually teaching students about their bodies, and for them to know what is going on with their injuries. When something else comes up later in life, I want them to know how to deal with it,” Noe said.

“One of the things I like about Sam is how calm under pressure she is. When something happens, she’s not panicking or spinning out of control,” Gatter said.

While handling patients in tense situations, Noe also deals with long-term injuries and meets individual patients daily. Junior Matthew McFerran broke his fibula from changing directions harshly in his game against Redmond High School on Sept. 26, putting McFerran on the sideline for the remainder of his football season. McFerran now spends every day with Noe, slowly working toward a full recovery. Noe said she loves that students can be very comfortable around her.

“Students see my office as a safe space. I get to hear about things like how their day went, and what is going on in their life,” Noe said. “It is one of the benefits of being Inglemoor’s trainer.” McFerran said he appreciates Noe’s kindness, honesty and intelligence during the recovery process.

“Sam is a great trainer. She is always making sure I don’t hurt myself even more, and for me to stay in shape while trying to get back,” McFerran said. She’s been there every step of the way, and I couldn’t recover without her.”