Last spring, a student at Bothell High School approached a campus police officer about a conversation he’d overheard, in which athletes described a practice called “Rape Squad” that involved players restraining a teammate and touching his genitals. 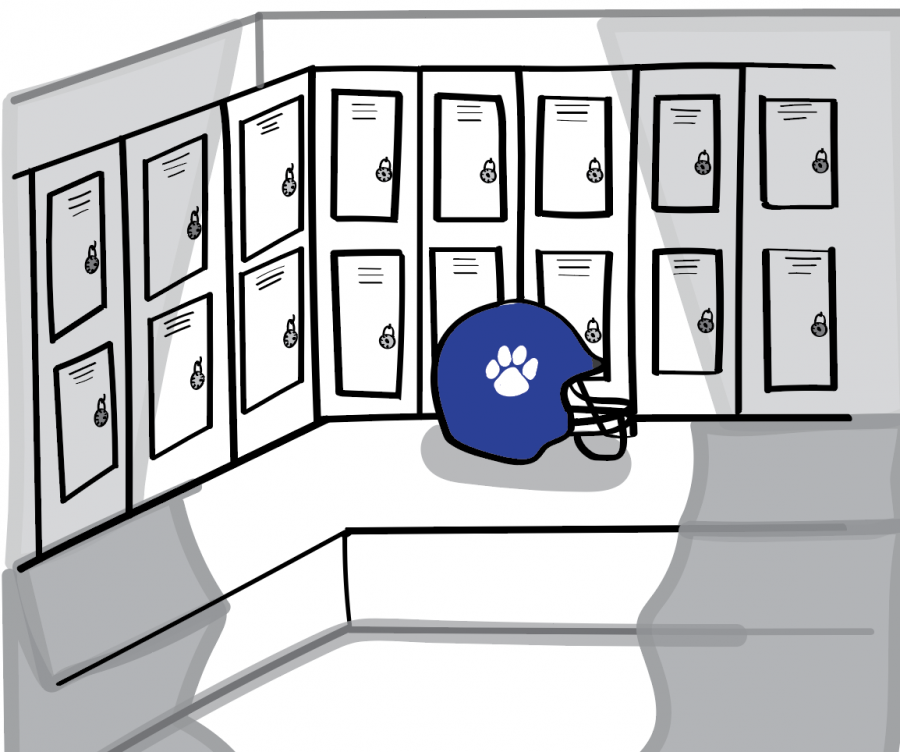 Illustration of a football helmet in the boys locker room. Art by Margaret He

Last spring, a student at Bothell High School approached a campus police officer about a conversation he’d overheard, in which athletes described a practice called “Rape Squad” that involved players restraining a teammate and touching his genitals. As reported by the Seattle Times, this investigation closed after only a few days. However, after similar reports emerged after a summer football camp a few months later, another investigation began.

Although neither the victims or their parents have pressed criminal charges, Bothell High School Principal Juan Price stated in an email that the school had handled the situation.

“I can confirm that the investigation was thorough and students were disciplined,” Price said.

He also said that overnight portions of the team’s summer football camp would be permanently cancelled, that staff would have a greater presence during practices, and that behavioral expectations had been reviewed.

However, little other information has been released regarding this controversy, aside from two emails, from Price and Superintendent Michelle Reid, both of which did not clearly address the issue. Reid described the incident in very vague terms that did not actually allude to what had occurred. Sexual abuse was not mentioned or discussed.

“As many of you are likely aware, there has been recent media coverage regarding the Bothell High School football program,” Reid said. “This is a complex situation… [and] this case provides an opportunity to revisit and thoughtfully explain what we legally can about a sensitive discipline matter…”

Most of the available information has been released through external media sources. Although federal FERPA laws prohibit the district from releasing information regarding disciplinary measures, details communicating exactly what occurred should be better communicated across the district —  regardless of the consequences.

Generally, there is a lack of knowledge regarding the full extent of the situation due to inadequate transparency by the district, which is necessary in order to abide with federal regulation. The two emails sent out by administration did not and could not address specifics nor the full severity of the matter. This lack of communication led to the spread of untrue and damaging rumors that arose from speculation in the absence of official and complete reports to the public.

Additionally, district-wide disciplinary action concerning this event sets an example for the future and can help to prevent such offenses from reoccurring. However, a lack of public awareness hinders this. Currently, the only disciplinary action known to outsiders is a suspension of overnight privileges, which to most, would not be an effective deterrent for future incidents. Instead, the district should establish concrete rules — such as in those the Student Handbook —  that explicitly state the consequences for incidents of this nature.

Most importantly, the absence of thorough communication undermines the suffering of all past victims of similar incidents. Already, there is a stigma surrounding boys and rape, in which male victims fear dismissal and judgement in coming forward. This specific incident could be instrumental in inspiring victims to come forward if consequences are made clear, but this is currently not the case. According to the Seattle Times, Garrett Ware (the police officer handling both investigations) declared that the activity was viewed as “horseplay,’’ a phrase that diminishes the true gravity of the situation. Deeming the contact “horseplay,” coupled with a lack of publicity regarding district action, fails to provide the justice and an adequate stance that victims of sexual abuse deserve.

The inadequacy of overall district coverage sets a harmful precedent in failing to establish a concrete story that can be used to raise awareness and prevent similar incidents from happening in the future or in other schools. One potential solution is to create regulations that lay out repercussions for violations of both physical and verbal nature in order to promote the well-being of all students, especially victims. Thus, rather than shying away from exposing controversial details, the district should prioritize the safety of the individual student over their reputation. After all, the job of the school is, first and foremost, to serve and protect the students.