With Halloween right around the corner, creep it real with some horror movies so you know what to watch to have a gourd time. 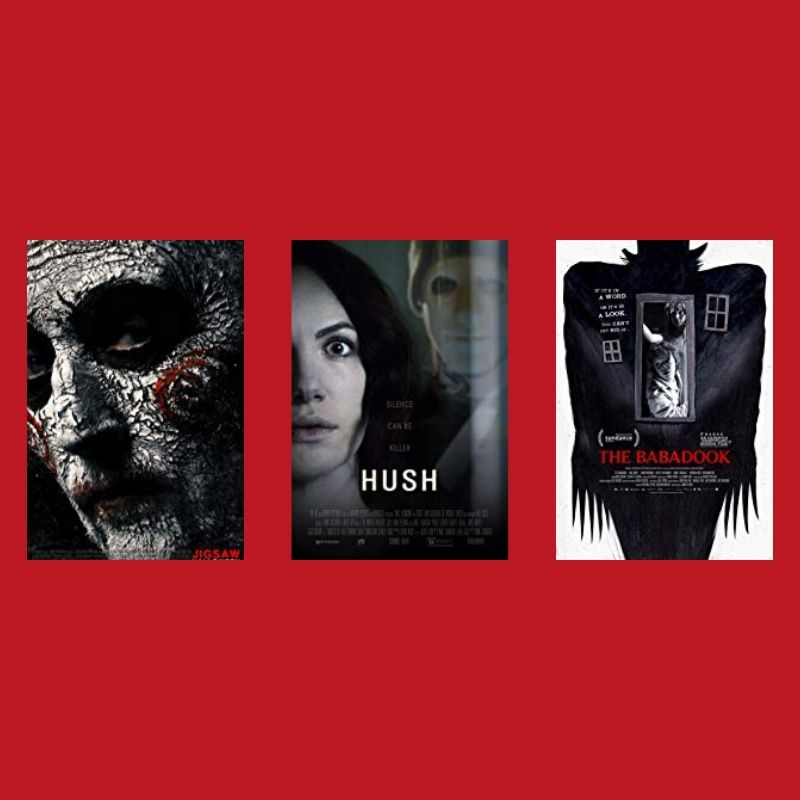 Halloween movies that'll get you in the spirit of the season. Art by Rahima Baluch

“Hush” (2016)
A deaf writer who retreated into the woods to live a solitary life must fight for her life in silence when a masked killer appears in her window.
Based on plot alone, this movie is not worth your time. “Hush” lacks some of the twists that are typically associated with the horror genre. The film does, however, find novelty in the small details. There is particular importance placed on sound, which has a way of elevating the movie past a simple thriller and into one you cannot easily forget. With a deaf character, much of the movie is either eerily quiet or silent. The quietness heightens the horror aspect and makes this movie a great choice for a quick but lasting scare.

“Jigsaw” (2017)
After a series of murders bearing all the markings of the “Jigsaw Killer”, law enforcement officials find themselves chasing the ghost of a man who has been dead for over a decade, becoming embroiled in a new game that’s only just begun. Is John Kramer back from the dead to remind the world to be grateful for the gift of life? Or is this a trap set by a killer with designs of his own?
To be straightforward, “Jigsaw” lacks tact and purpose. It is essentially the sticker on a fruit: a waste of resources. The movie is one long killing spree full of over-the-top gore. The characters fall into the classic horror movie clichés and contribute absolutely nothing to the plot. The plot itself is a reach, and by the end, I found myself rolling my eyes waiting for the credits. For fans of the “Saw” franchise, this movie isn’t altogether a let-down since it revisits the same gory themes fans have grown to love. Ultimately though,  there isn’t enough meaningful plot for the ending to have a lasting impact. The twist at the end, meant to shock and scare the viewer, ends up cheapening an already valueless movie.
“The Babadook” (2014)
A single mother plagued by the violent death of her husband, battles with her son’s fear of a monster lurking in the house, but soon discovers a sinister presence all around her.
The Babadook explores themes of motherhood through a supernatural presence that haunts a single mother and son. The underlying psychological horror this movie exhibits leaves a haunting impression on viewers. The movie showcases a slow descent into insanity and personifies it. This extended metaphor makes the movie ideal for those who like to be left wondering and asking questions. An altogether satisfactory movie, it does at times become almost comical. Most of these comedic instances stem from the son and his melodramaticism. It quickly returns to frightening, however, leaving an ultimately positive impression horror fans are sure to love.