Earth Corps implemented reusable metal utensils this fall in response to the 62,000 plastic utensils wasted in the 2018-2019 school year. 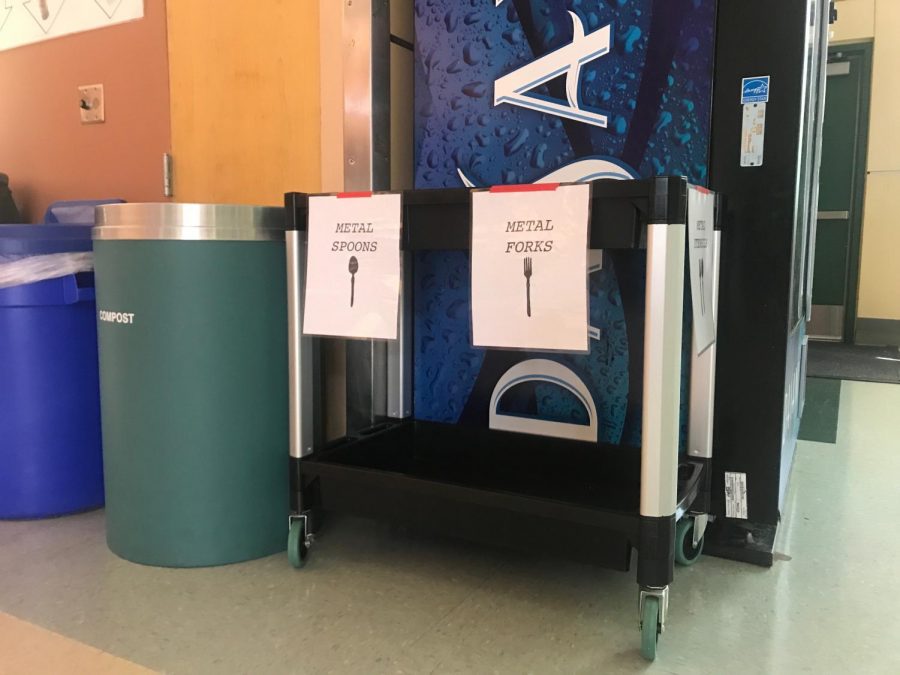 Earth Corps implemented reusable metal utensils this fall in response to the 62,000 plastic utensils wasted in the 2018-2019 school year.

last year. Initially, the club considered compostable silverware for the cafeteria. However, the district favored reusable ones for a variety of reasons.

“With compostable, you have to continually buy it, and it’s seven or eight timesmore expensive than regular plastics. We got the impression from the district that the energy costs of washing the reusable silverware outweighed the cost of compostable ones,” Black said.

weren’t returned, resulting in their current use of plastic utensils.

To keep the utensils from getting lost, bins are stationed by the trash, recycle and

compost bins in the cafeteria.

“Utensils are still disappearing. When it comes time to collect the silverware, thelunch staff has noticed that the utensils aren’t coming back and they are having to refill more often. Kids are either taking them off site or throwing them away since many were found in the trash,” cook assistant Carla Paul said.

“I’d say there are probably 30 in a bin and when we come back to collect. We just

aren’t getting the silverware,” Paul said.

“When the club first set out to implement the new utensils, we thought of having a

place outside each building where the utensils could be collected,” Black said. She also

she’s working to put it into effect.

Despite the disappearances, Paul said the new system is important for the environ-

King County. In May 2019, Inglemoor became a Level 2 Green School for maintaining waste reduction practices and engaging in energy conservation actions through the use of reusable utensils.