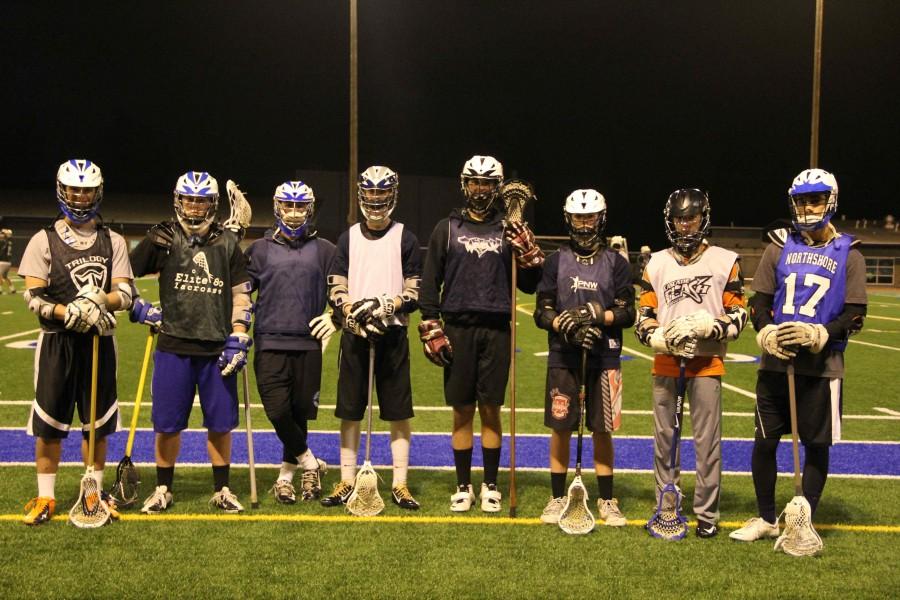 Players line-up during a practice after finishing a drill. This is the first year in which all the players will be from Inglemoor after previously sharing a team with Bothell players. As a part of Division II, they will play teams from Bothell, Lake Washington, Juanita, and Redmond High School.

Many varsity and club sport teams at Inglemoor hold a strong reputation for their performance and spirit. However, there are also several non-sanctioned teams from Inglemoor that also deserve recognition.

Through the Washington High School Boys Lacrosse Association (WHSBLA), there is a team made up of Inglemoor boys who proudly represent the high school.

“We have a young team this year with one senior and only a few juniors,” sophomore Chase Almond said. “From that standpoint it looks like we will have a strong team for the upcoming seasons after this one.”

In their first year separated from Bothell players, the team is still not a school-sanctioned club or sport due to a financial barrier. The team already pays a costly $600 for uniforms, league fees, referees, field usage, etc. and therefore don’t want to pay an extra $400 in order to become officially affiliated with the high school.

However they will still compete against local high schools. The many teams are divided into several divisions based on their skill level and experience, which has placed the new Inglemoor team into division two. The first match of the regular season will take place on March 17 at Redmond high school. Though the season has not yet begun, the team is already looking forward to state competitions as well.

“I want to build a team of competitive young men who want to rebuild a tradition of Inglemoor lacrosse,” Coach Pete Brownlow said.

The team is made up of players ranging from those with years of experience and those who are brand new to the sport altogether. Chase Graham, the lone senior, has high hopes for the future of the team and players that will remain after he graduates.

“I definitely hope that in the future we can get more connected to our community,” Graham said. “I think that there’s always been a huge separation, because no one’s ever known about lacrosse and having it as a part of Inglemoor will help us reach it back to our school.”

Despite the lack of awareness for the sport, the athletes are excited to represent Inglemoor. They also hope that, over the next couple of years, awareness and interest will increase, which will help the program grow.