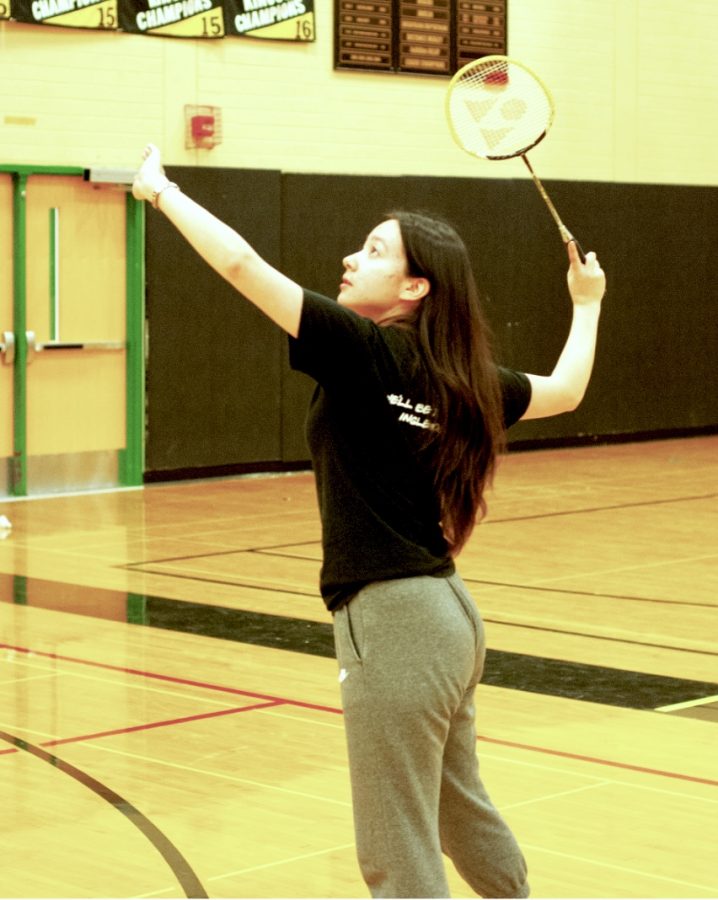 Senior Angela Clemens, who has been playing badminton since her sophomore year, hits overhand during badminton practice on April 30 for their KingCo game on May 1.

As the season comes to an end, girls badminton looks to improve next season following their 0-12 record this year. Despite their difficulties this season, the team had a record number of 40 members, and they still remain a close-knit community.

“The tight bond we formed between everyone on the team has not changed a single bit,” senior Angela Clemens said. “It’s a warm and supportive atmosphere where everyone can enjoy playing badminton.”

Sophomore Aditi Saraf, who has been playing badminton for the majority of her life, also said that the team has shown a lot of progress since last year.

“The team has grown so much,” she said. “Even though our team was about two and a half times bigger, I feel that our sense of community and family was a million times better!”

The girls also said that they love their team environment.

“We’re a big, happy, supportive family,” Saraf said. “Every single person on the team is so excited, and we go watch others’ games whenever we can because we genuinely care and want to show support.”

In addition to an inclusive team environment, many members of the team said that they have strong role models.

“I think I look up to every single person for a different reason,” Saraf said. “I look up to Anisha [Chowdhry] and Eva [Taylor] as they are the best captains a team could ever have, and I want to be able to lead like them in the future.”

Although their season is over, these girls continue to show support for each other.

“We might not always win matches, but we try our best and keep our spirits up,” senior Anisha Chowdhry said. “I have witnessed so many of my teammates grow as people and as players.”

As the team changes every year, the girls said that there are many things they will miss about this season.

“I love our team dynamic, and I’ll miss everything,” freshman Aila Nakajima said.  “Everyone’s so friendly. I’ll miss practicing and playing with everyone.”

The girls also outlined their goals for their next season.

“To improve, I think we just need to play more,” Chowdry said. “My hope is that the team goals for next year will be about keeping up our supportive attitude and just making sure we are preparing people for competition.”