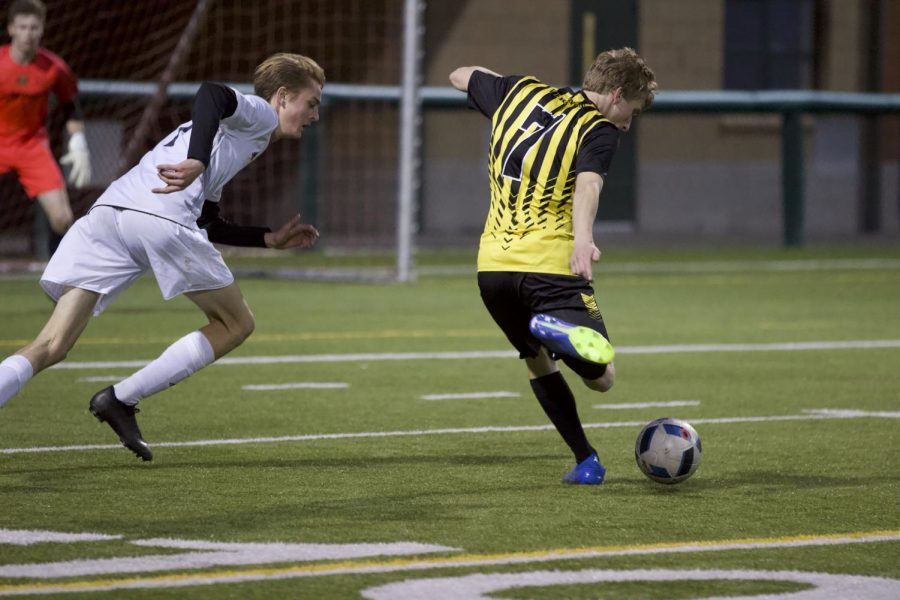 Forward Gabe Fahling shoots towards the goal in the first half of the game against Eastlake on March 27, although it eventually got saved. “[The coach] wants us to get more counter attacks,” Fahling said. “We want to defensively try to win the ball back more.”

As the regular season comes to an end, boys soccer continues to power through their final games with the goal of making it to the KingCo playoffs for a second straight season.

According to head coach Kevin McGibbon, the team hopes to perform well in the district, make it to state and be the top team in Northshore School District.

The team currently stands near the bottom of the table, with a win-loss-tie record of 3-4-0 in the league and an overall 4-4-2 record for the season with two conference games left in the season.

Earlier this season, the boys lost their three-game winning streak after conceding a penalty in their loss to Eastlake. The team has looked to its strategy in an effort to come back by applying more pressure.

“We are looking to defend a little higher and with more pressure at times to see if we can win the ball back in our attacking half of the field,” McGibbon said.

This season, the schedule has changed from two games a week to only one game a week, which has allowed the team to combat injuries — a setback from last season — and focus more on their strategies and tactics.

“It’s a different schedule format,” McGibbon said. “We only play everyone once a week and so that means that every game is like a playoff game and we have to take that mindset into it,” McGibbon said.

This year, the team also introduced three new foreign exchange students onto the roster, which brings in new perspectives and experiences to their playing. Junior David Enderle is from Freiberg, a city in Eastern Germany, and has played on a local club team there for a majority of his life.

“Soccer in Germany is the main sport, and there’s no other sport that is just nearly as popular as soccer,” Enderle said. “On my team in Germany, we always try to play short and easy and from the back.”

According to senior captain Timur Akdemir, the coach emphasizes the team to play it from the back and as a whole press their opponents more.

As the team continues to build on last year’s success and jump back into a winning streak, they look to make it in the postseason again.

“We barely qualified for playoffs last year… and this year we are doing a little better,” senior captain Gabriel Fahling said.

Akdemir believes that the team has the skill set to achieve its goal with the new changes brought to the system.

“The postseason is a little different. We play against WesCo 4A, and that is not how it was last year,” Akdemir said. “I think we should be able to [do] good in that too and get further in the state.”