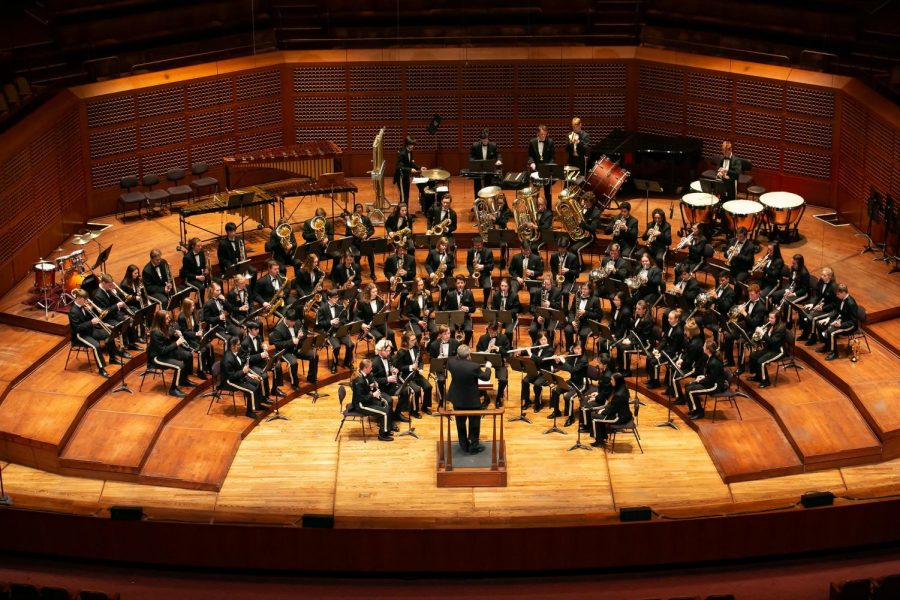 Wind Ensemble performs on April 8 in the Louise M. Davies Symphony Hall. Along with the Chamber Orchestra, they were selected for an encore.

Nearly 100 band and orchestra students traveled to San Francisco for the April 8 Festival of Gold, where the nation’s most-accomplished ensembles performed in the Louise M. Davies Symphony Hall. Three Inglemoor ensembles took part across two instrumental categories. Conductor Charles Fix led the Chamber and String Orchestras; music director Ted Christensen led Wind Ensemble. One after another, groups took the stage to perform in front of a panel of judges.

A total of 20 Inglemoor students were nominated to perform in the Honors Ensemble, which included musicians from across the country and staged an additional performance following the main event. On April 6 and 7, nominees were driven to Capuchino High School in San Bruno, where they met with other performers and rehearsed their assigned piece.

“We got to bond over something,” first violin Colin Bacon said. “It was a shared connection — we’re musicians. I think they enjoyed it as much as we did.”

Principal second violin and lead trumpet Max Chastain, who performed in all three Inglemoor ensembles, described the daylong competition as a marathon.

“I didn’t get a rest,” Chastain said. “Getting ready, warming up, cooling down, setting instruments [in their] places, trying to get people to set up my trumpet and everything. We were tired, but we played well, so it was okay.”

Inglemoor Chamber Orchestra and Wind Ensemble were both selected for an encore from their respective categories and drew the Festival of Gold to a close with a repeat performance. The three ensembles had been eating pizza on their charter bus as rain fell outside. According to Chastain, they were notified by a text over dinner.

“That lightened the mood for sure,” he said.

All three ensembles returned to the concert hall, taking turns to perform with the Honors Ensemble, take an encore, and watch others doing the same.

“That our students were selected to perform in the encore concert was both exciting and validating,” Fix said. “They represented our school community well. They impressed everyone who met them with their maturity and musicianship.”

At the conclusion of his last trip with the music department, Chastain reflected on the experience.

“I was very proud of everybody else in the sections, the whole band, and the orchestra,” he said. “I feel like, even as a leader, we’re all kind of doing the same thing. If everybody else wasn’t leading with the same intensity I was, there wouldn’t be any music.”

Chastain said he was determined to enjoy the moment.

“You know, that’s how music goes,” he concluded. “In the words of Frank Sinatra… ‘That’s life, that’s what people say. You’re ridin’ high in April, shot down in May.’”