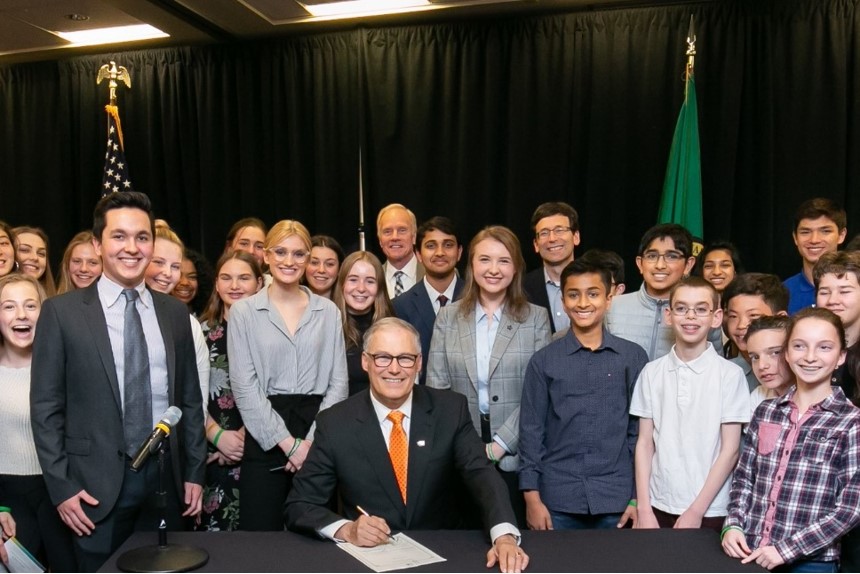 On April 1, Gov. Jay Inslee signed the T21 bill at the Fred Hutch building in Seattle.

As of March 27, the Washington State Senate had a vote of 33-12 in support of House Bill 1074, also known as the Tobacco 21 or T21. On April 1, the bill was delivered to Gov. Jay Inslee, and the official signing occurred on April 5.

T21 calls for a raise in age from 18 to 21 in order to legally purchase vape and tobacco products. This increase in age essentially affects which people are able to physically purchase such products.

“I think [the new law is a] good thing,” sophomore Alice Hicks* said. “It stops kids from getting tobacco and trying to get cigarettes since, you know, historically kids were smoking.”

Currently, the law will be implemented on Jan. 1, 2020. While the state shifts to this new law, tobacco and vape shops will need to adapt accordingly; T21 primarily affects the consumers tobacco shops may sell to.

Section one of the House Bill 1074 states that “A person who sells or gives, or permits to be sold or given, to any person under the age of ((eighteen)) twenty-one years any cigar, cigarette, cigarette paper or wrapper, tobacco in any form, or a vapor product is guilty of a gross misdemeanor.”

Due to T21, many vape and tobacco shops will be facing a decrease in legal customers as people ages 18-20 will no longer have the ability to purchase such products. However, this law does not criminalize those who are underage in possession of any vape or tobacco product.

“This is nice,” junior Lloyd London* said. “Kids won’t have to worry as much about harsh consequences too early on.”

In recent years, the concern of the legal smoking age has increased as a response to the accumulating number of underaged vapers in the state. In section two of House Bill 1074, “According to the 2014 Healthy Youth Survey, 41 percent of 10th-graders say it is ‘sort of easy’ to ‘very easy’ to get cigarettes.”

Furthermore, this data reports that almost 50 percent of sophomores can obtain cigarettes, which shows the likelihood of easy access at stores or even at home.

“The reality is people will find different ways to get it: vapes, juuls and weed,” Hicks said.

Statistics from 2016 indicate that 95 percent of smokers begin before the age of 21, 80 percent of adults form daily smoking habits before 21 and 33 percent of underage smokers eventually become diseased.

“Vaping is an epidemic among our age,” freshmen Louise Dan* said. “Limiting access to such an addictive product can only benefit us in the long run.”

Disclaimer: The co-editor of Nordic News, Cami Brix, was in attendance as part of her role as a Washington State Campaign for Tobacco-Free Kids Representative and as a PTSA student representative. Her attendance does not reflect the views of the Nordic News staff as a whole, and she had no part in writing this article.