Love songs through the decades 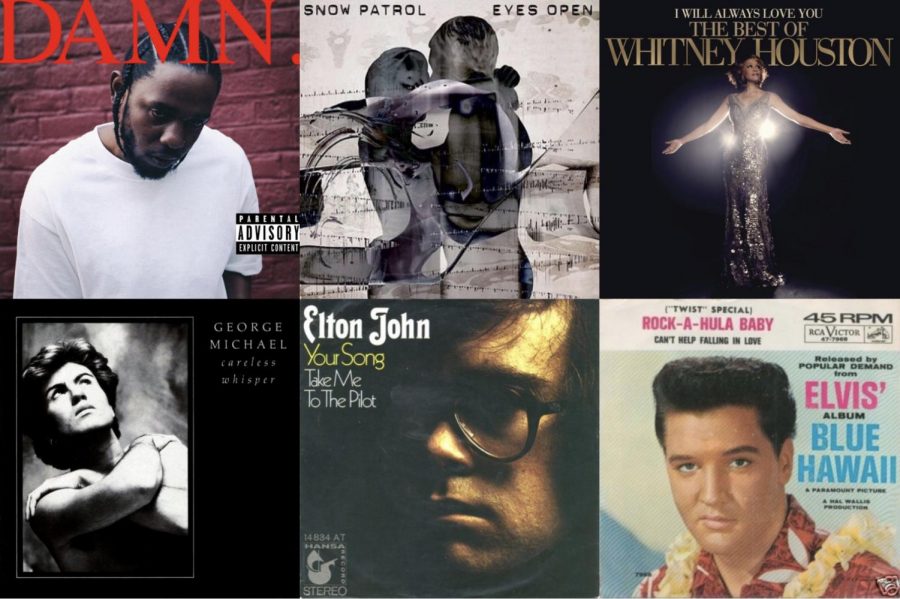 The ’10s: “LOVE” by Kendrick Lamar
Throughout the album “DAMN”, Kendrick Lamar delivers one of the most emotionally and sonically deep songs of 2017 titled “LOVE.” ft. Zacari. The song has cemented its place as one of the best love songs of the decade. Too often, love songs are saturated with solemn pianos and cheesy lyrics, but Lamar, guest singer Zacari and producer Teddy Walton bring a modern, genuine take to this genre. Lamar breaks from the norm for love song lyrics. Instead of filling the song with played out motifs of pain, forgiveness, and longing, Lamar focuses on authentic love. While this song may have been written for Kendrick’s then-fiance Whitney Alford, the entire world fell in love with “LOVE.”
The ’00s: “Chasing Cars” by Snow Patrol
Snow Patrol’s most well-known song “Chasing Cars” came out in 2006. The catchy chorus and honest lyrics make the track a favorite love song to this day. The song opens with an instrumental of simple guitar and piano chords, then builds throughout the song as the singer’s love for his companion gets more intense. The song is especially relatable to teens because it depicts the familiar story of falling for someone but being scared to tell them “I love you.” The lyrics perfectly capture the innocent, naïve moments of young love that will make you long for summer nights when you and your other half can “waste time chasing cars.”
The ’90s: “I Will Always Love You” by Whitney Houston
This love song is notable not only for its heartfelt lyrics but Whitney Houston’s raw, emotional performance as well. Though the song was originally written as a country tune by the legendary Dolly Parton, Houston drastically changed it to a pop ballad for the movie “The Bodyguard” and turned it into every girl’s go-to heartbreak anthem. The 1992 ballad became one of Houston’s most iconic songs and remains among the top 10 best-selling singles of all time. The beautiful ballad starts off mellow with an acapella intro but becomes passionate as Houston’s voice grows more powerful to portray her heartbreak. The song sends a message that love is a powerful thing, but it doesn’t come without obstacles.
The ’80s: “Careless Whisper” by George Michael
The duo between George Michael and Andrew Ridgeley known as “Wham!” was a decade-defining band that released multiple No. 1 albums and singles throughout their career. No song better exemplifies the duo’s musical talent like the song “Careless Whisper,” released in 1984.

“Careless Whisper” hooks the listener with the now iconic saxophone riff intro that sets the smooth, sensual tone carried throughout the rest of the song. Michael carries the vocals in this song with his yearning, love-lost voice as he thinks back to his past mistakes and how they led to losing a loved one. This song has been immortalized in history as one of the most romantic, risqué love songs of the 80’s.
The ’70s: “Your Song” by Elton John
Elton John has been a prominent figure throughout the decades, but none more than in the ’70s when he dominated the billboards. One such billboard, Top 100, was the 1971 classic “Your Song.” Elton John’s pianist skills combined with Bernie Taupin’s expert songwriting come together to create a song expressing love in one of the oldest, most genuine ways: writing a song for your significant other. John was openly bisexual in the 70s, and later became openly gay. This may contribute to the fact that this song is so universal, as no gender was said, leaving it to the listener’s mind. “Your Song” captured the world in the ’70s, and has held it ever since.
The ’60s: “Can’t Help Falling in Love” by Elvis Presley
Although ‘The King’ was known for his suggestive lyrics that thrilled teenage audiences and aided the sexual revolution of the ’60s, this ballad is one of Elvis Presley’s slower and more romantic pieces. The intimate lyrics describe love as something we have no control over when we find someone we can’t resist falling for. The song features a chorus of background singers and a peaceful instrumental with a Hawaiian vibe since it was written for the 1961 rom-com movie “Blue Hawaii” starring Presley. The track is a true classic that has been covered many times over the years and will likely always be one of the greatest love songs ever made.