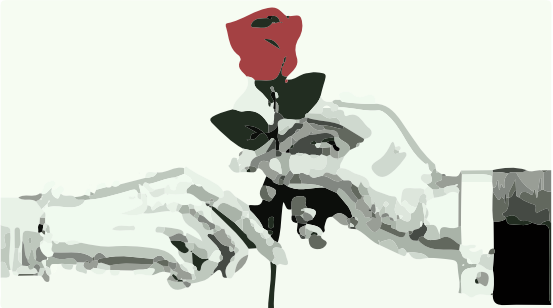 Valentine's Day is often recognized to celebrate romantic love. But what is the real meaning behind this special day?

Today, take a step back from all the paper hearts, chocolate hearts, balloon hearts, store-bought hearts and look at the real hearts. We should reflect on the real reason Valentine’s Day was created: to value all those who are significant within our lives.

Too many people pity themselves for not having a romantic partner, saying they are unlovable and compare their single life to couples who are “in love.” At the same time, some of those who are in relationships end up feeling alone because their partner has forgotten about the holiday or the expectations of a Valentine’s Day celebration were not met. In both of these scenarios, people create this idea that being in a relationship equals love. When we narrow the ideas of Valentine’s Day to definitions of romantic love, we exclude almost everyone else because they may not have romantic love.

Society says that having a day specifically made to appreciate love is a shallow act, and some teenagers do treat the holiday for their own interests.  They expect to be showered with gifts by their significant other to determine how much they are loved. On the flipside, other teenagers show no care for the holiday believing it to be another trap into consumerism. In fact, based on the school survey of 327 responses, 52% of students believe that Valentine’s Day is not important. From the same responses, 41.6% say they celebrate the holiday with friends while only 28.7% say they spend time with their significant other. This data only contradicts the idea that Valentine’s Day doesn’t matter because people still care to celebrate it with their friends.

Going back to the origins of Valentine’s Day, the purpose was to honor Saint Valentine, a third-century Roman saint. Historians say he defied the emperor’s law by marrying couples in secret.  The law stated that lovers were to remain separate, allowing the males to be sent into the emperor’s army. In no way did St. Valentine benefit from these actions since his only reward was death. Through Valentine’s actions, we see that Valentine died for the love of others and not his own. Not many people are aware that this was the real reason Valentine’s Day was established, to commend this Saint’s selfless actions. With this history, the holiday should not be disregarded and should be better understood by today’s youth on the appreciation of real love.

The 52% who say Valentine’s Day is unimportant should reconsider their choice. Life is busy, people work and at the end of the day, we are exhausted, too tired to acknowledge those around us. The sad truth is, not many of us would admit that we forget to show our loved ones we actually love them. Some could argue that actions are stronger than words, but sometimes we all need the extra reassurance that we still matter to someone.