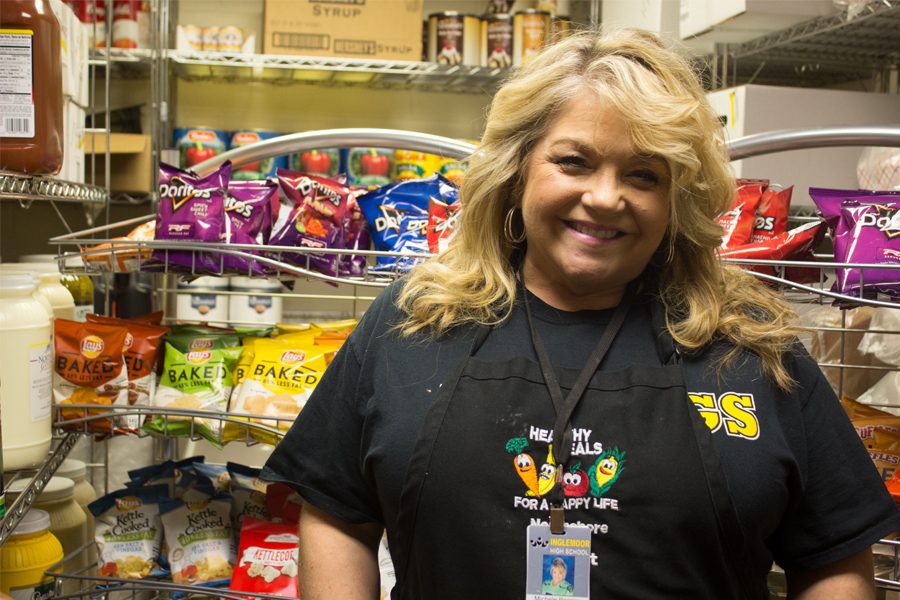 General manager Michele Bergley stands in front of the new chip racks in the back of the cafeteria room.

When students walk into the cafeteria, they are greeted with a new variety of items, ranging from the colorful Dippin’ Dots to healthy yogurt and fruit parfait cups.

This year, members of the lunch staff said they aimed to completely change the environment of the kitchen as well as produce a healthier and wider range of items to the menu. Many of the improvements have been the work of the new manager, Michele Bergley, and the new assistant manager, Debbie Kem.

Bergley worked as the general manager at Café Mario at Nintendo in Redmond for 27 years before deciding to work at Inglemoor.

“I just decided, you know what a neat thing to come back to high school and hang out with the kids,” Bergley said.

She has many responsibilities as the manager. Her job includes supervising eight staff members, planning the menu, working at the cash register and dealing with orders. She is also responsible for creating a welcoming environment in the kitchen.

“[My job includes] keeping the morale up, keeping everybody following,” Bergley said.

But the changes don’t stop in the kitchen. Bergley has brought new and improved ideas to most aspects of the cafeteria, including the long lunch lines.

“I am working with the principal to think of some better flow [of the lines],” Bergley said.

She also introduced the a la carte room, which opened on Monday, Nov. 26.

There’s going to be ice cream. We are hoping to have coffee [and] of course, we’ve got the Dippin’ Dots,” she said.

According to Bergley, the food quality has gone up from last year.

“I think we are cooking fresher food, the salad bar has grown immensely,” Bergley said. “I know they have been testing new recipes… we just started scratch cooking soups.”

Along with making fresher meals, the snacks sold at the cafeteria follow similar guidelines by selling healthier options.

“Everything’s nutritionalized and they’re called smart snacks.,” Bergley said. “They got to fit within the school nutritional guidelines; they’re all selected to be a healthy snack.”

Debbie Kem, the assistant manager, said that Bergley was the one who encouraged the administration to consider the two lunch system that went into effect in early November.

“She’s made a lot of suggestions like that [that] have made the kitchen run smoother,” Kem said.

One of the returning staff members, Joanna Villamil has been working in the Northshore School District for nearly eight years. She joined Inglemoor this past March, prior to Bergley and Kem’s arrival.

With the addition of the new meals and recipes in the kitchen, Villamil has noticed a positive reaction among the students.

“To see plenty of variety, the students feel happier because there is so much more to pick from,” Villamil said. “They don’t have to necessarily eat the same thing given every day or every week–they have a variety to pick from now.”

Villamil’s underlying goal is always ensuring that the students are content with the environment of the cafeteria.

“I always try to make sure that the kids are well, with a smile on their face and that the kids come in [to the kitchen] and find a nice place,” Villamil said. “I hope that always happens.”