Vaping epidemic: The rise of the Juul 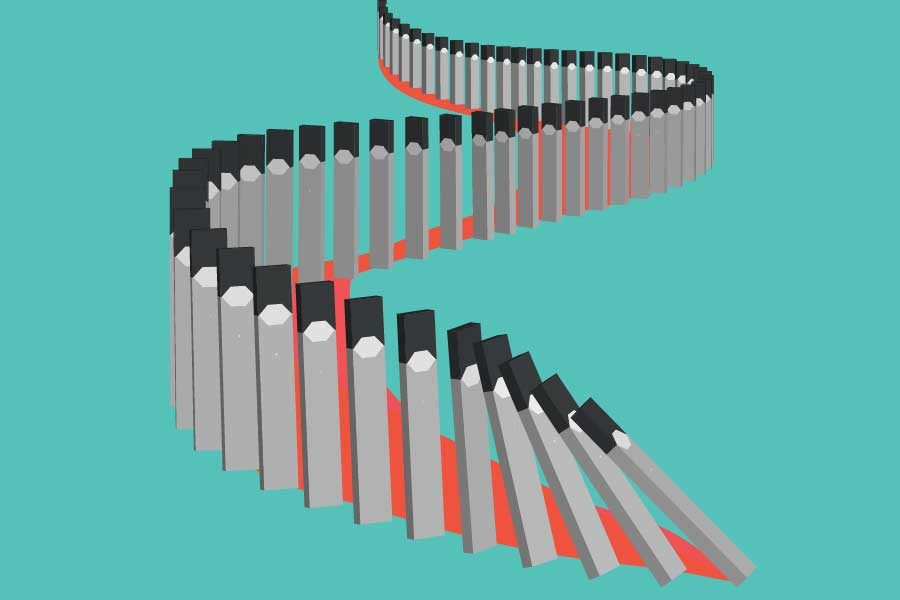 According to the FDA, the use of vaping has become a nationwide epidemic among teens. But how is it affecting our school?

The 2017 Monitoring the Future survey was conducted by researchers at the University of Michigan and collected data from 43,703 students at 360 public and private high schools across the nation, reporting that one in 10 students vape nicotine. Over the last decade, the popularity of this activity among young adults has been transforming the lives of those who choose to partake in it.

People need to be 18 years or older to buy vaping devices in a store, but people of all ages can buy them online. Not only that, but these devices are also easily concealable; the design of the Juul, a type of e-cigarette, was modeled to resemble USB drives.

Senior Mark Dickinson* said that vaping is so accessible that he was able to try it in seventh grade and he hasn’t stopped since then. Today, he vapes once every hour.

“For me, it’s become [like] a morning coffee where it’s something I need to function,” Dickinson said.

However, the motive behind vaping is different for everyone. Although she has only done it for the past year, junior Vanessa Johnson* said she couldn’t stop after the first time she tried vaping because of how good it makes her feel.

“The main reason I continued to vape was the buzz I get from the nicotine, which is pretty much the same thing you get from a cigarette,” Johnson said.

The case was similar for senior Kent Foster* who said he was drawn to the “thrill of vaping.” But over the few months he has been actively doing it, Foster said vaping with his friends has helped him control a constant need to vape that other people can develop.

“Vaping, as a social thing, is okay once in a while because you’re around [friends] who would naturally try to watch out for any signs of addiction,” Foster said. “But doing it on your own enables those with addictive personalities to take vaping too far and that’s when it becomes a real problem.”

However, Dickinson said friends who vape together will eventually adapt to using these devices frequently, which is what happened with his friend group.

“Whenever I go out with a couple friends now, there’s a very high likelihood that one of us has a vape,” Dickinson said.

Although vaping can create closer bonds between friends and help control addictions, Foster said it can also lead into something that’s much scarier: peer pressure.

“Peer pressure is definitely a big part of it because if [some people weren’t] peer pressured to vape, then they would have never gone out of their way to vape,” Foster said.

With vaping becoming more prevalent in high schools, schools across the U.S. are taking initiatives to prevent vaping such as installing vape detectors in bathrooms and implementing disciplinary procedures, according to The New York Times. Johnson said that although she’s cautious when it comes to using her device, she is still concerned about being negatively impacted by the consequences.

“I think what scares me more about vaping [than the health risks] is the risk of actually getting caught,” Johnson said. “But it’s fun so I do it anyways.”