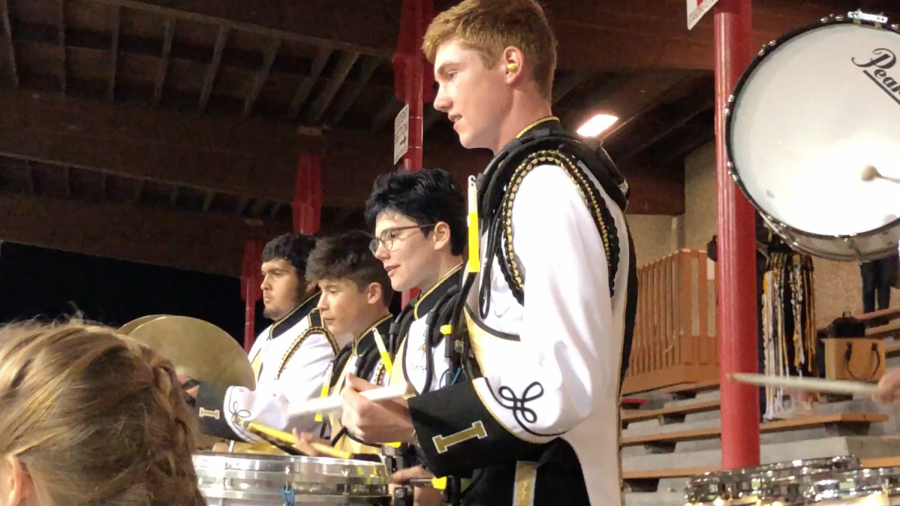 Over the years, drumline and cheerleaders have excited the crowd at sporting and school events by performing cheers. Some of them have become emblematic of the Viking spirit such as the cheer “Take Off Your Pants.” However, during this year’s football season, the administration has questioned if teenagers yelling “too sexy for my pants, so sexy yeah” is appropriate in a school environment and may be looking to phase the cheer out.

Principal Adam Desautels said the cheer was originally incorporated into the schedule of this school year’s first pep assembly as a cheer to teach all students, but he opposed it and requested that it be changed to something else. Other cheers such as “Gigolo” and “We Went Down to the Pop” were taught instead.

“I simply don’t feel like we should be teaching kids cheers that include them yelling ‘take off your pants’ at people, and I believe we shouldn’t be encouraging students to take clothing off at school events,” Desautels said.

Senior drum major Beatrice Duchastel said that marching band students understood the motivation behind this decision, but they were also taken aback.

“When you remove such a classic aspect of Inglemoor tradition, you are definitely going to get a lot of backlash from students,” Duchastel said.

Senior and snare drummer Gavin Wright said despite the administration not wanting to promote this cheer, they did not prevent drumline from performing it. For the first time in years, he said they didn’t introduce the concept of “Take Off Your Pants” to the new underclassmen in drumline. In spite of this, they continued to perform it after the fourth quarter of football games this season due to its popularity among the student section.

“This is a cheer that people like and I think that will continue no matter what, so the more the [administration] tries to make us not do it, the more students will want to,” Wright said.

Although band and drumline are aware of the administration’s perspective on “Take Off Your Pants,” not everyone else is. Senior and cheerleader Chloë Roberts said she didn’t know about the potential changes that could be taking place around this cheer and neither did the majority of the cheer team.

“[If they phase it out completely], I think it’d affect the cheer team and the whole student section because everyone looks forward to it and it’s been a tradition for a long time,” Roberts said.

Earlier this year, when she personally spoke to the administration about this issue earlier this year, Duchastel said they were mostly concerned that the student section may have a hard time separating the lyrics of “Take Off Your Pants” from reality. However, Wright said it seems unnecessary to protect people from hearing the lyrics.

“The words don’t really mean much in the way that no one actually forces people to take off their pants in the stands; people just jump around and [cheer] it,” Wright said.

For the time being, Desautels said the cheer will continue to not be taught as part of any class or school activity. The future of it, however, is unclear.

“We could look at a policy [but] we’re not there yet. It’s also something that could be easily replaced with a more appropriate four-syllable phrase,” Desautels said.

If the administration ever chooses to ban the performance of “Take Off Your Pants,” Duchastel said the process would need to be a slow one and finding a cheer to replace it would be difficult.

“It will take a lot of careful work and planning because everyone has such an emotional connection to the cheer as a part of [our] school spirit,” Duchastel said. “[Drumline] would have to replace the cheer with something else and it would take more time for that to carry the same weight that ‘Take Off Your Pants’ has [developed] over the years.”