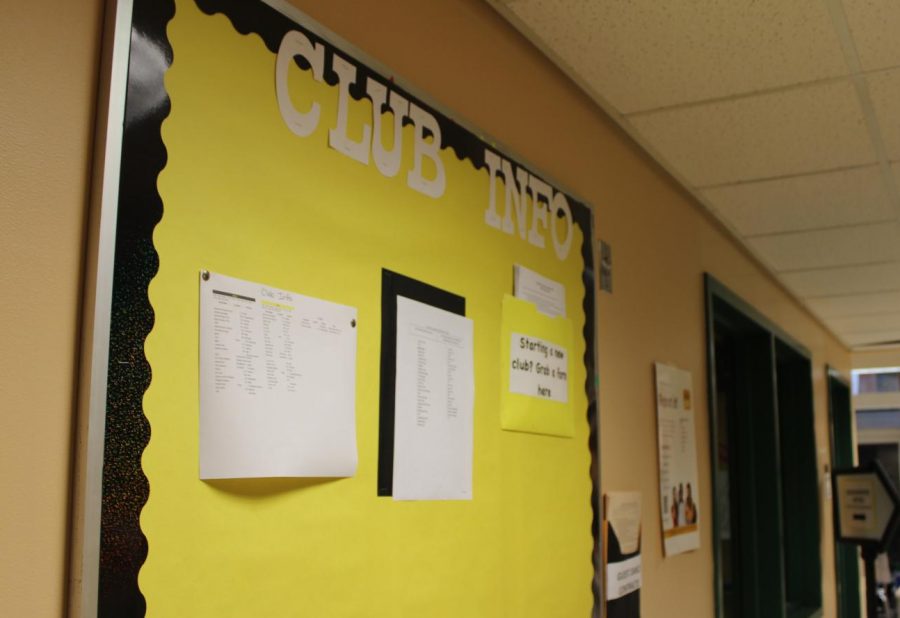 The ASB Club Board can be found in the Student Center. It will continuously list all clubs, the current schedule, and important news updates.

“We got together as a staff and did a big survey with our staff asking what they wanted to see with our advisory days and club days,” Kowalski said. “The staff unanimously said that they wanted as much consistency as possible. So that’s why we made club days for Mondays and [advisory] for Tuesdays.”

ASB has created ‘Black and Gold’ days that will rotate every Monday to allow students to attend multiple clubs. Certain clubs will only be on Black days, others on only on Gold Days and a handful will be on both days. The first club day on Mon. Sept 24 will be a Black day.

To help students keep up with clubs there is the addition of the ASB Club Board posted right outside bookkeeper Sarah Heindel’s office. As new clubs are created, the board will be updated senior Hunter Essex, ASB’s Club and Fundraiser supervisor said.  Students interested in starting a new club can find the required forms attached to the board.

“I do like that it’s predictable,” senior Gavin Wright said, “but it makes it hard if you have multiple clubs of the same category because we have clubs so infrequently. They’re kinda pushed to the side.”

To address this problem of limited club time, Kowalski said she suggests finding alternative times to hold meetings. Clubs could meet during lunch or after school with the approval and attendance of their advisor. After school meetings are made more accessible by the activity bus that runs Mondays, Tuesdays, Thursdays and Fridays at 4:30 p.m.
Club Pass Policy
Last year, club advisors directly gave student members passes to attend during Viking Time. However, with the new “Black and Gold” club schedule, it is currently under discussion as to who will distribute those passes.

If students are allowed to attend multiple clubs on Black or Gold days, there is the possibility of multiple passes per student. To monitor pass distribution, Kowalski said, there can only be one source to hand out passes.

As of Sept. 20, the pass system has been finalized and students can get their club pass by visiting Heindel in the cafeteria window.

“[The pass system] might be something where we test it out, take it back, then try again,” Desautels said. “We need to make sure we roll it out in a way that’s effective.”
Poster Approval
Campus poster policy will undergo a large change this year. While posters had not been monitored in the past, Desautels will be putting a new policy in place which requires all media to go through Kowalski before it is posted around campus.

“The only piece I’m looking at is if it follows district protocol,” Kowalski said, “and I’m hoping that I’ll catch all of the spelling mistakes.”

Other reasons behind this new policy are the risk of outside advertisements, Desautels  said, a common issue in other areas of the district. The ASB approval stamp will be a simple way for faculty to check to see if posters have been put up by people within the school community.

Kowalski said she will attempt to get posters approved as soon as possible. For approval, students may drop media in her box or come directly to the ASB office and ask.

In addition to posters, clubs were invited to school functions to advertise and recruit members.

“All the clubs were invited to the Back to School Fair, Parent Night and to the upcoming open house [on Sept 20],” Essex said. However, there will be no in-school club exploration this year.

Despite the many new changes in school clubs this year, Kowalski said, ASB will be working to make the transition as smooth as possible. However, some students are still concerned that club awareness could decline.

“I see where ASB and those who want to have more regulations are coming from in enforcing the rules,” sophomore and ONE Club president Lydia Morgan said, “[but the new policy] might make it [club awareness] harder, especially in these beginning months when you need to spread the news, specifically by flyers.”