The girls gymnastics team leaps into the season with promise 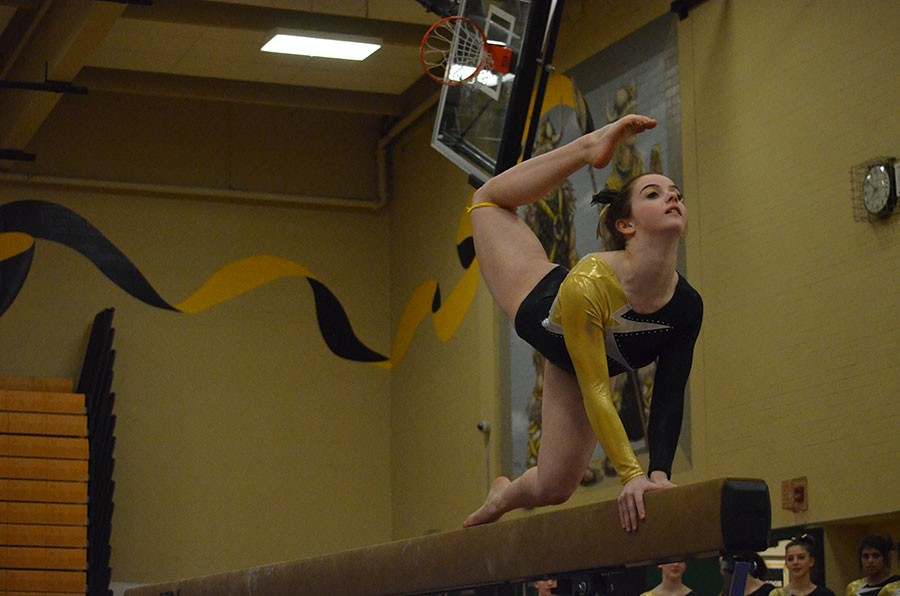 Junior Charlotte Berkman focuses on her balance during her beam routine.

Unity, enthusiasm and hard work comprise the very spirit of the girls gymnastics team. With the adjustment to their new coach, a lot has changed for the team. New skills are acquired each practice with a constant focus set on improvement.  So far, the team has seen a few setbacks, including various minor injuries.

“We have had quite a few injuries here and there- sprains, muscles pulled, cuts, bruises, and scratches. But that just comes with the sport and we still manage to make it through the season in one piece,” senior captain Alisa Kean said.

Yet there is no lack of effort shown by the athletes.

“Sometimes we have girls sick or injured who can’t compete and other teammates are so willing to step up and compete in place of them, even if they aren’t prepared,” Kean said.

With their strong determination, the team continues to progress at a steady pace under the guidance of coach Moselle Campbell. Running the team through structured workouts to prepare the girls physically and mentally is just part of a normal practice. The rest is left up to the girls by finding positives in defeats and encouraging each other to practice harder.

“After every meet we say one positive, which is one thing we have personally improved at,” senior  Amanda Peay said. “It helps find the good in every meet and recognize the progress of all the girls.”

Junior Charlotte Berkman describes coach Campbell as “the best coach I have had in my 13 years of doing gymnastics,” which says a lot about how Campbell’s coaching is improving the team’s skills.

The team started showing how much they improved by defeating Eastlake after losing to them one week before.

Gaining strong headway, the girls gymnastics team moves on to the second half of their season with confidence and eagerness.

Senior athelete Alicia Barker seemed to benefit from the new style in  coaching, as seen in how well she is able execute floor routines and bring the heat to the competition.

“With a new coach, I think we have progressed a lot,” Peay said. Despite not being as successful  as previous years, the girls perseveres through this season with an official record of 0 wins, giving them  an opportunity to continue to find new ways to improve.