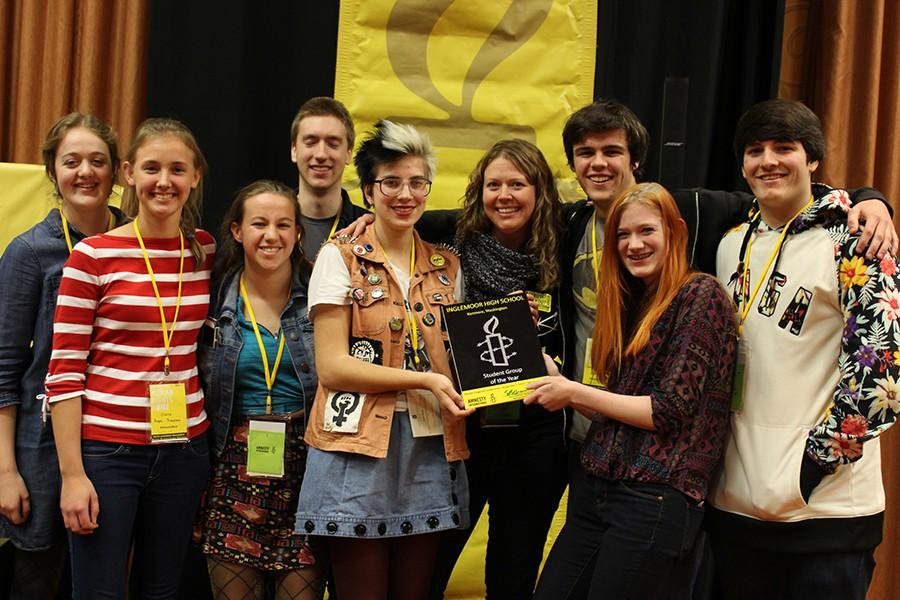 Eight students took the initiative to fly to Albuquerque, N.M. for an organization they love and to protest violations agains human rights.

“We didn’t technically go as a club,” senior co-president Peyton Carroll said. “But a couple of us really wanted to get the experience of attending the conference and share it with our club later.”

None of those who attended expected their club back home would win the Student Group of the Year.

“I am pretty sure my jaw actually hit the floor,” senior co-president Ailish Collins said. “It detached snake style and just fell all the way to the ground.”

The students didn’t think their club would be recognized because, unlike most of the other Amnesty student groups, which usually meet for around an hour each week, Inglemoor’s Amnesty Club is limited to 20 minutes each week. But, it was exactly this disadvantage that gave them the edge for the award.

“Sara Schmidt, the field organizer who presented us with the award, explained to us that we did just as much, if not more, than all of the other clubs despite our time limitations,” Carroll said.

In addition to the various actions the club has worked hard to complete, they have also turned their attention to improving the club itself.

“Last year was kind of a rough year for Amnesty International,” Collins said. “So we decided to get the members back up and find people who are actually invested in what we do here.”

The club currently has over 50 members, and even though a small handful attended the conference, all of these members won the award, not just those who traveled to New Mexico.

“The award went to our whole club,” Carroll said. “It tells us that we are doing a good job and actually making a difference and accomplishing something. It also provides us with the motivation to do better.”

The Amnesty club is not decreasing their efforts now that they have been recognized as the student group of the year. They are already working on their next action, Write for Rights, which will take place during December.

“Everyone should come help us write letters to help protect human rights,” Carroll said. “You can ask us questions about the club and help us make the club even better.”