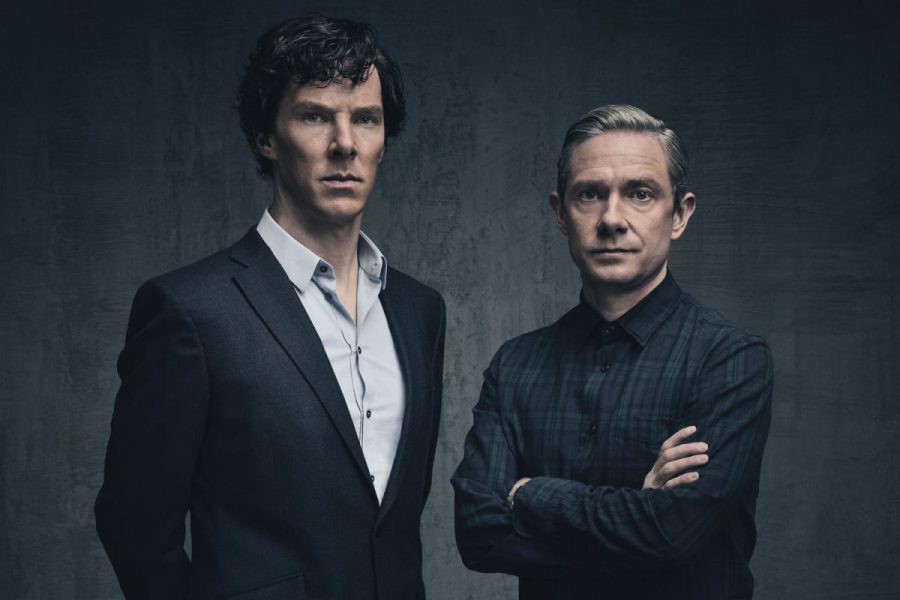 Benedict Cumberbatch and Martin Freeman star as Sherlock Holmes and Dr. John Watson in the award-winning BBC show “Sherlock.” The series was created by Steven Moffat and Mark Gatiss in 2010, with its most recent season released in 2017; due to the escalated popularity of the lead actors, however, it is uncertain when – or even if – the show will be continued.

When he crosses paths with eccentric detective Sherlock Holmes (Benedict Cumberbatch), war veteran John Watson (Martin Freeman) is brought back onto the battlefield – but this time, to face the elaborate salient of crime. In this series, the classic tales by Sir Arthur Conan Doyle are reimagined into the contemporary world, with each episode promising a new mystery. Whether they are unraveling the legend of a demon-like hound or confronting sinister criminal mastermind Jim Moriarty (Andrew Scott), Sherlock Holmes and Dr. Watson ensure that every case is filled with clever twists, unpredictable revelations and witty humor.
2. The Honorable Woman
Minutes per episode: 58   Number of episodes: 8

In an effort to contribute to resolutions in the Middle East, British-Israeli businesswoman Nessa Stein (Maggie Gyllenhaal) reforms her father’s arms-dealing company into a business dedicated to improving communication between Israel and Palestine. Ironically, however, the further she travels into the peace process, the more secrecy and violence she unveils. As Nessa witnesses betrayal from all sides, she begins to question the possibility of any level of trust, both in her personal life and on an international scale. The show’s dramatic conflicts and intricate plotline reflect the true complexity of the current situation in the Middle East, surrounding the story with a heavy real-life significance.
3. A Series of Unfortunate Events
Minutes per episode: 40-65   Number of episodes: 18

This Netflix Original show, based on the book series “A Series of Unfortunate Events” by Lemony Snicket, follows the story of the extremely luckless Baudelaire siblings: inventive Violet (Malina Weissman), book-loving Klaus (Louis Hynes) and sharp-toothed Sunny (Presley Smith, Tara Strong). After their parents perish via a strange fire, the children are sent to live with their distant relative Count Olaf (Neil Patrick Harris). It soon becomes apparent, however, that Count Olaf is an evil imposter with a wicked plot to steal the Baudelaire family fortune. The orphans must outsmart him and his followers in their wild attempts to claim the money while chasing after clues about a mysterious organization that is somehow connected to their parents’ pasts.
4. Tales by Light
Minutes per episode: 20-25   Number of episodes: 12

This National Geographic series follows professional photographers as they travel the world with a camera in hand, in pursuit of a story to capture. Although a documentary series may not be a typical genre for binge-watching, this show is definitely a worthwhile choice; between its explorations of distant cultures and expeditions through fantastic scenery, “Tales by Light” holds ample beauty to captivate anyone, regardless of their prior interest in photography.
5. The Fall
Minutes per episode: 55-90   Number of episodes: 17

Detective Superintendent Stella Gibson (Gillian Anderson) is assigned to investigate the murder of a young woman, the most recent of three similar deaths in the city of Belfast, Northern Ireland. In addition to facing her personal conflicts, Stella must work alongside local investigators to figure out the strange mind of the responsible murderer. Meanwhile, Paul Spector (Jamie Dornan) resides nearby in the unusual position of family man by day, serial killer by night.
6. The Good Place
Minutes per episode: 22   Number of episodes: 13

Eleanor Shellstrop (Kristen Bell) is not kind, nor humble, nor righteous – so when she dies and ends up in “The Good Place,” an afterlife reserved only for the most virtuous people, she knows there has been a mistake. Unwilling to give up her spot, Eleanor enlists a fellow afterlife resident named Chidi (William Jackson Harper) to turn her into a better person. In addition to its use of quirky humor, the show is memorable for its portrayal of ethics and the unexpectedly important role of philosophy.
7. Zumbo’s Just Desserts
Minutes per episode: 50-55   Number of episodes: 12

From ice cream igloos to fairytale-themed cakes, a dozen amateur bakers take on a series of colorful challenges and vie for the $100,000 prize. The competition is hosted by Adriano Zumbo, who pushes the contestants’ culinary abilities with his difficult and creative Zumbo Tests. In every episode, the two lowest-scoring bakers must face off in a single dessert-making challenge, eliminating one competitor and leaving the other to continue towards the title of “the next Willy Wonka.”
8. Riverdale
Minutes per episode: 45   Number of episodes: 35

After their high school classmate is suddenly murdered, Archie Andrews (K.J. Apa) and his friends (Lili Reinhart, Camila Mendes, Cole Sprouse) start to realize that their small town of Riverdale is not as innocent as it seems. The show, based on the main characters from the Archie Comics franchise, combines drama, romance and mystery to form an intriguing tale of secrecy. The teenagers are placed into a modern suburbia and, while still in the midst of their own personal struggles, become entangled in the realization that Riverdale is darker and stranger than they thought.
9. Black Mirror
Minutes per episode: 40-90   Number of episodes: 19

Humanity and technology are pitted against each other in this intense sci-fi anthology. The show depicts a dystopia in which the worst facets of human nature are faced with society’s most prized creation: technology. The episodes are not sequentially related (apart from a few easter eggs and subtle connections), but every alarmingly-possible version of reality is still equally engaging. Raising eye-opening moral questions along the way, the show follows the backfire of one of the many existing technology-based obsessions in the current world – from smartphones to reality TV – and explores the dark consequences.
10. Santa Clarita Diet
Minutes per episode: 25-35   Number of episodes: 20

When Sheila Hammond (Drew Barrymore) inexplicably develops uncontrollable zombie-like characteristics, she and her husband Joel (Timothy Olyphant) are forced to deal with the many obstacles that accompany this unusual development in their otherwise normal lives. With help from their 16-year-old daughter Abby (Liv Hewson) and their neighbor’s teenage son Eric (Skyler Gisondo), Joel and Sheila work on figuring out their new unconventional existence. Between satisfying Sheila’s newfound hunger and hiding the results from the neighbors, some scenes are very graphic, making this series most suitable for a non-squeamish audience.