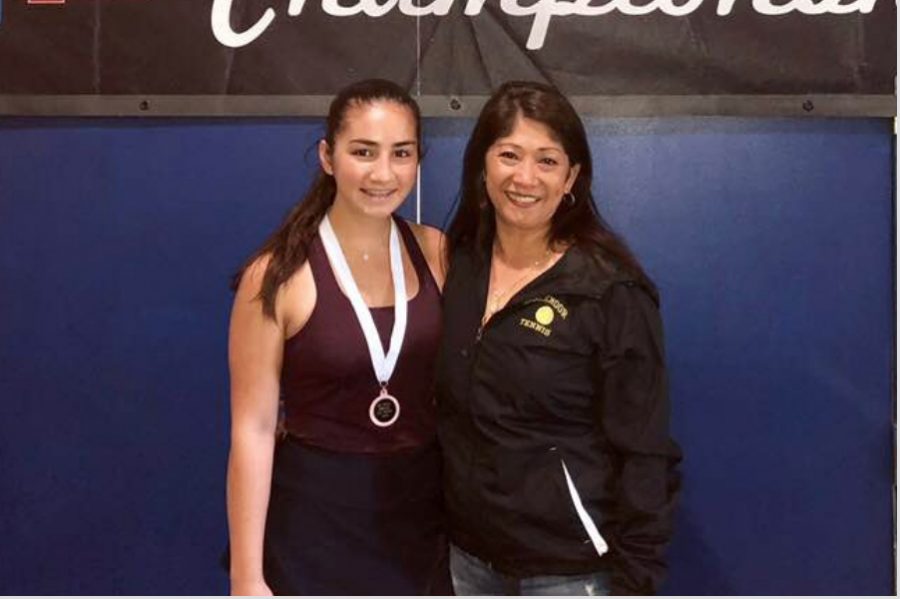 After the state tournament, Brooke Demerath smiles with the girls tennis coach, Jane Demerath, who is also her mother. Brooke Demerath said that she is not only supported by, but also inspired by her family.

In May, freshman Brooke Demerath placed fifth in 4A singles at the WIAA State Tennis Championships, the first girl to represent Inglemoor girl’s tennis at the state level since her older sister Sabrina Demerath in 2012.

Demerath qualified for state after placing second at the district level. She was also named First Team All KingCo in the 4A KingCo Girl’s Tennis All League Selections for the school season.

Despite having played tennis her entire life, Demerath said that she only started playing seriously two years ago. Before that, she participated in swimming and soccer. Now she is ranked twelfth in the West and aims to continue playing beyond high school.

“My goal in tennis is to play at a D1 college on a full ride scholarship like my sisters,” she said.

Meanwhile, during this tennis season, Demerath hoped to qualify for the USTA national team, which she earned with her performance at the state tournament.

“I recently found out that I did [qualify] so I’m extremely happy right now with that,” she said.

Demerath said that her family members are her biggest supporters because they send her to academy and to competitions on a national scale.

“I play national tennis all around the country, from California to Florida,” Demerath said.

Looking forward to playing at nationals, Demerath said that her greatest motivation is winning.

“I’m extremely competitive,” she said, “and tennis is just the sport I fell in love with.”