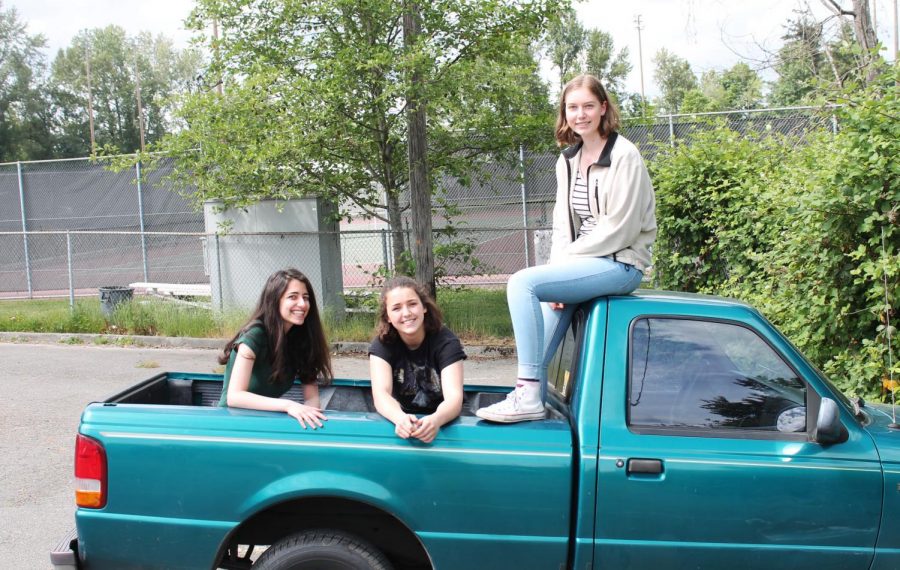 From left to right, seniors Surya Hendry, Megan Munson and Maya Holt sit in senior Ewan Brown's truck for their final picture as a triumvirate.

Surya Hendry
Unbelievably, at the end of my sophomore year, I considered leaving Nordic. It didn’t feel like the right fit. I felt too nervous conducting interviews, too uncertain writing ledes, too shaky creating graphics. Journalism probably wasn’t for me.

Two years later, I am confident that my impulsive decision to stay paid off. Nordic became a constant throughout my high school experience; a single, evolving community in which I learned how to write, how to learn and how to lead. Now, it really is time for me to leave, but not without a few thank yous to the people who made my time on Nordic most worthwhile.

If I had to pick a single word to describe Nordic this year, it would be growth. Megan, Maya and I walked in at the beginning of this year with a vision for Nordic that existed only in our collective imagination. We were left awestruck when the staff not only accepted our visions, but employed raw talents in writing, photography and design to turn imagination into reality.

However, what fills me with the most pride and hope is not the Nordic staff’s amazing array of talents. Instead, it is everyone’s willingness to grow together: to take risks, reflect, and take risks again; to encourage one another to try new things; to turn every issue into an adventure.

I am proud because these risk-taking Nords are some of my closest friends. I am hopeful because this is the staff that Cami, Shannon and Oliver are inheriting, and I know that under this new triumvirate, Nordic will only continue to flourish and grow.

Maya Holt
June 18 is circled in red ink on the calendar on my wall. Every day for the last few months I’ve looked at that calendar, realized how far away that red circle still is, then grumbled something to myself about how high school is a prison, rebellion is futile, etc, etc.

But now, that circle is barely over a week away and it feels different. It still marks a new beginning — but it also means that the last day of Nordic will be behind me, and that makes me incredibly sad.

Leading this year’s staff alongside Megan and Surya has been an absolute honor. The people in that staff box are some of the most talented, kind-hearted, hilarious people I have ever met, and I can count among them some of my closest friends. It’s because of these people we were able to make some kickass papers and bring our website up to the next level. It’s comforting to know this will continue next year in the hands of Shannon, Oliver and Cami.

Megan Munson
As Surya, Maya and I began planning for this year, we were beyond ambitious. We redesigned both the paper and the way it operated. In every book I’ve read at school, those who were ambitious fell short of their goals (and often got murdered in the final act).

Thankfully, this wasn’t the case for any of us — and that was entirely due to the raw talent of this staff. They took each vision we had and made it a reality like it was no big deal. Returning staff members adapted to a newspaper that was very different from the one they’d known, and new staff members brought even more new ideas to the table.

I believe in this staff so much, and I know that next year, this environment of moderated chaos will continue to thrive. Cami, Ollie and Shannon, you three have been godsends for the past year. Not only are you strong journalists, you have the leadership and organization to make Volume 48 an incredible one.

Over the past two years, Nordic has introduced me to many of my favorite people. My goal for this year was to make issues that we could all be proud of; now, I am proud not only of the pages we’ve made, but of the people who made them. I can’t thank you guys enough for being our staff — and for being my friends.