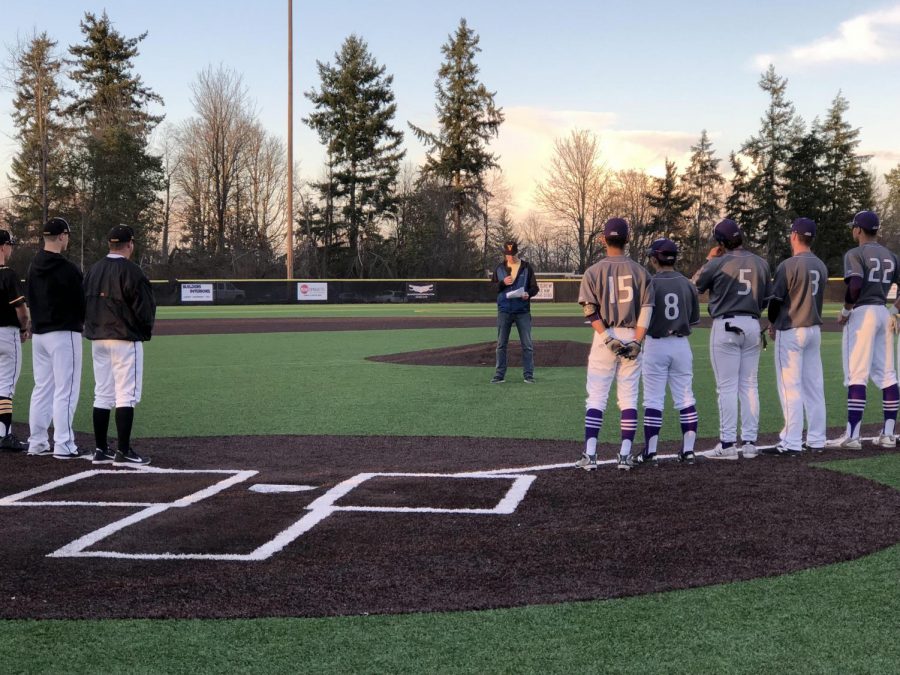 IHS and LWHS players line up along the baselines during the Justin Marshall memorial ceremony at Inglemoor, honoring Justin’s life and dedication on March 16.

Friday, March 16. Players, and coaches from the Inglemoor baseball program watch and listen in the moments leading up to their game. On every one of their black Viking hats, a yellow “JM” is stitched onto the side, a new addition to the design of the uniforms.

Marshall passed away in July of 2017, the summer following his return as an Inglemoor baseball coach. He left behind his wife Sarah Marshall, and three children.

Additionally, Marshall left behind a legacy at the Inglemoor baseball program that won’t be forgotten any time soon. In 2001, Marshall was a part of the team that won the Kingco baseball championship (the last Inglemoor team to do so), before coming back 16 years later to coach.

Bishop said when he was hired as head coach in the offseason. Justin’s father, Jeff Marshall, and JV coach Josh Shore approached him with the idea to put together a scholarship and memorial to remember Justin.

Together, they made a plan to commemorate Justin’s life and his impact on the program.

The memorial featured Justin’s father, several of his teammates from the 2001 championship team, as well as Justin’s oldest son Calvin Marshall, who came out to throw the first pitch.

“It was a really beautiful night… It was just a nice night to have two games and remember Justin, and what he meant to the program,” said coach Craig Bishop.