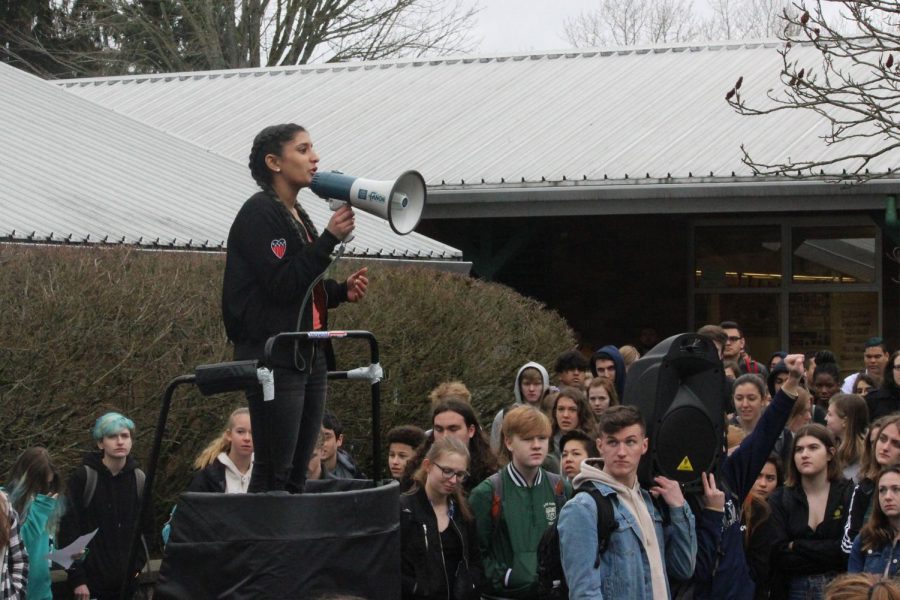 Junior Anisha Chowdhry speaks out against gun violence at the student walkout on Wednesday, March 14. Schools throughout the U.S. participated in the walkout to support the survivors of the Parkland shooting and initiate legal change to gun laws.

On March 14 at 10 a.m., hundreds of students stepped out of their third period class and joined the #ENOUGH national school walkout. For 17 minutes, students gathered in the courtyard to show their solidarity with the survivors and 17 victims of the Florida school shooting.

The goal of this protest was to send a message to adults across the country that students aren’t willing to live in fear of being shot at school anymore said the head organizer, junior Anisha Chowdhry.

“Just because [a school shooting] happened in Parkland doesn’t mean it couldn’t happen to us,” she said. “This does not affect just one school. It affects every school.”

Inspired by the courage and leadership of the Parkland survivors, Chowdhry said she took it upon herself to spread the #ENOUGH movement to Inglemoor.

On Feb. 20, Chowdhry created the “Inglemoor High School Walkout” Facebook event, which 117 people marked as “going” and 120 people marked as “interested.”  Of those interested people were senior Maddie Smith, sophomore Olivia Wisont and freshman Anna Aliverti who joined Chowdhry in planning the walkout.

To support the large level of interest, Chowdhry and her leadership team have worked closely with school administrators over the past weeks to ensure the safety and the success of the event. Additionally, students spoke in front of the school board to gain its approval. Chowdhry said administration was very helpful and supportive of their efforts.

Administration, recognizing that not all students would  feel comfortable participating in the walkout, opened the theater and library for those students, which included  senior Anna Brandel.

“It’s not that I am against it, but I felt like it wasn’t my place to go,” Brandel said. “I definitely believe in honoring the lives lost in the school shooting, but I feel like the walk out has become  less about that and more about making speeches on other issues.”

The walkout consisted of a 30-second moment of silence for the 17 victims and four student speeches. Simultaneously, flyers including state representatives’ contact information as well as petitions were passed around.

“We feel that the legislative branch and government in general need to make steps to make sure school shootings like Parkland never happen again,” Wisont said.

This movement extended beyond Kenmore; students at all four Northshore high schools participated in their own walkouts. Across the nation,  tens of thousands of students walked out.