Cheerleading: Is it a sport? 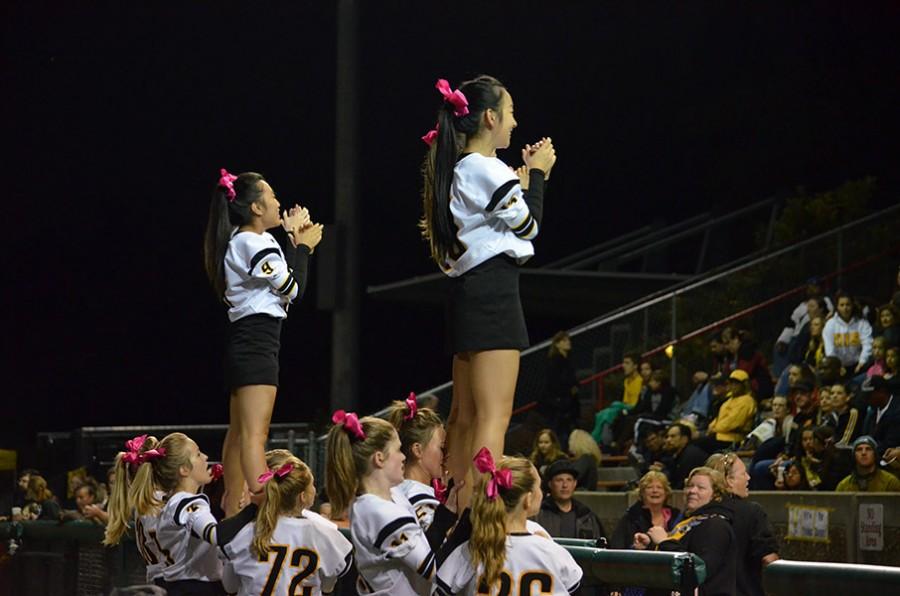 Juniors Ruby Li and Patricia Lee are held in a prep stunt while cheering at the Homecoming game. Cheerleaders practice four hours every week in order to perform at games year round.

Pom poms, high kicks, ponytails and a bright smile, this is the image of a cheerleader. But all the pep, the short skirts and stereotypes surrounding cheerleaders keep people from realizing the amount of work cheerleaders put in to keep their stunts perfect and their kicks high.

Cambridge Dictionary defines sport as “an activity, done for enjoyment or as a job, that takes physical effort and skill.” Cheerleading fits within this defintion but the school district doesn’t consider cheerleading a sport.

Despite this, cheerleaders are required to sign an athletic code. Logically, this should make them athletes, which, in turn, should make cheerleading a sport, but this is not the case.

Cheerleading can’t be found on the school athletics page, and is instead classified as an activity. But when there are girls performing practically death defying stunts in front of a crowd, why shouldn’t it be  considered a sport?

“When we’re lifting girls up in the air, we’re in charge of their life,” junior Julia Leonard said. “That’s not considered a sport and tossing a ball around is?”

The district not classifying cheerleading as a sport causes problems for cheeleaders. These issues affect the way people think about them, as well as affecting physical aspects.

School sports are provided transportation to games, but cheerleaders don’t get the same privilege.

“Sometimes we’re travelling to places that are pretty far away, and we have to worry about finding a ride and paying for gas,” junior Rachel Medunic said.

Getting a ride to games isn’t the only drawback to not being considered a sport. The hard work cheerleaders put in is not acknowledged when we think of a stereotypical cheerleader: someone who doesn’t work hard, who isn’t that smart and who is an “airhead.”

In reality, girls trying out for cheer must get teacher evaluations and write an essay on why they want to be a cheerleader. They must maintain a 2.8 GPA to participate in cheer activities, in comparison to the district mandated 2.0 for athletes. Once they make the squad, they are required to take a leadership class. They in no way fit the stereotype perpetuated by the media’s depiction of high school.

While this dedication to school work doesn’t necessarily have anything to do with cheer being a sport, the hard work and dedication to athletics that their routines take definitely does.

“We put in practice year round, and that’s more than any other sport that I know of,” senior Sydney Ross said. “The work that we put in, I wouldn’t say it balances out. I would say it almost goes above and beyond what actual players do.”

“In other sports, athletes can be angry and sad that they’re losing, but we always have to have a positive attitude and make everything as positive as possible. We put in a lot of work and we have to maintain a good record with the school,” Ross said. “People see us. It’s not just like we’re there for a season and then we’re gone.”