“The Egg and I” in review 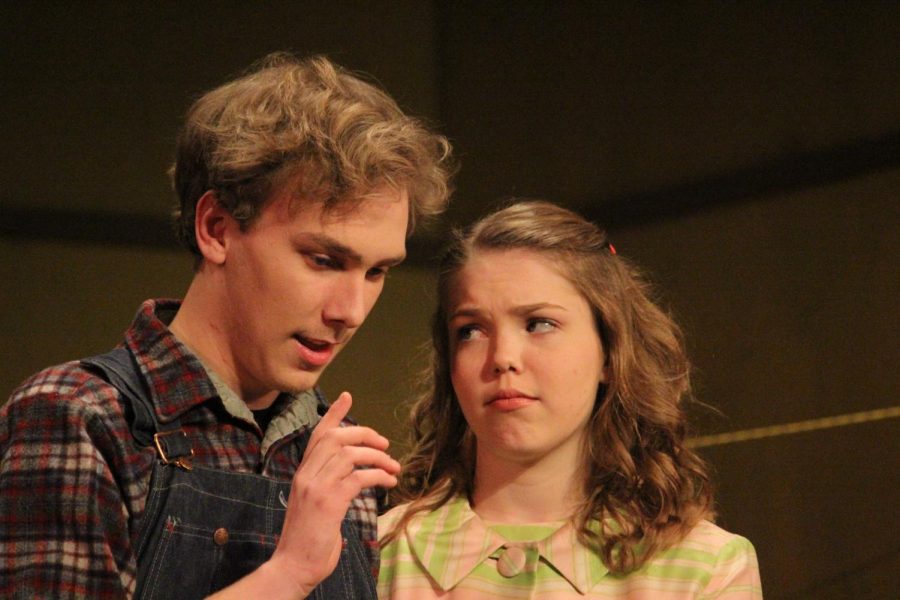 The Valhalla players’ performance of “The Egg and I” centers on the theme of making the most of things — both for the characters and the actors who play them. The main characters, Betty MacDonald in particular (senior Katie Orr), are making the best of their situation as novice chicken farmers. The actors, meanwhile, certainly made the most out of an outdated script with a stellar performance.

“The Egg and I” is based on Betty MacDonald’s memoir, which was first published in 1945. It details the trials of the author’s new life with her husband and two daughters, having recently been relocated from their life in Seattle to a chicken farm on the Olympic Peninsula. Throughout the memoir and its theatrical adaptation, the MacDonalds are met with encounters with rural neighbors and a variety of dilemmas (e.g. the appearance of an unwanted skunk).

Unfortunately, the episodic quality of the play makes it feel rather disjointed, and audiences may not feel compelled to give the actors, set-design, costumes and special effects the full attention they deserve as a result. There are a few storylines to follow within the family, such as Betty MacDonald’s correspondence with her Seattleite friend (senior Grace Hammarlund) and a hapless love story between MacDonald daughter Anne (senior Lillybeth Held) and Thad Elliot (senior Jacob Kreiger). However, without a central narrative to follow the play is a bit difficult to watch.

This difficulty is compounded by the old-fashioned “values” that are presented in the script. One of the MacDonald daughters, Joan (freshman Daisy Held), for example, has the central goal of losing weight and find a boyfriend. In addition to this, in the original script  a Native American character is the target of racist jokes. Thankfully, the Inglemoor production replaced the latter character with a crotchety old white man, Ned Grundle (senior Julian Adams), and some of Joan’s lines were rewritten so it didn’t sound like she was promoting anorexia.

Despite all of the above, the cast certainly did an excellent job with what they were given. Their comedic timing was impeccable, their faces constantly emotive and were able to develop a wonderful rapport with one another on stage (the MacDonald family members in particular). Some of the jokes still fall a bit flat, but this is simply because the “wit and high humor” the original memoir was marketed with are a bit old-fashioned for today’s audiences. In fact, as a result of the actors’ abilities one positive aspect of the script was augmented — while it may be out of touch in terms of characterization and humor “The Egg and I” captures the bickering-family dynamic spot-on, and the actors were able to bring this out.

The crew, too, brought out the best in the production. The set was rustic and the painting of a Cascades beyond the living room window did a nice job of setting the scene. The sound effects of peeping chicks and pouring rain also added to the ambiance of the show.

“The Egg and I” is worth going to if not for the story itself, but for what the cast and crew bring to it. Just as long as audience members go expecting an extremely egg-centric and old-fashioned show (including a rousing square dance at the beginning of Act 2), they will enjoy themselves.