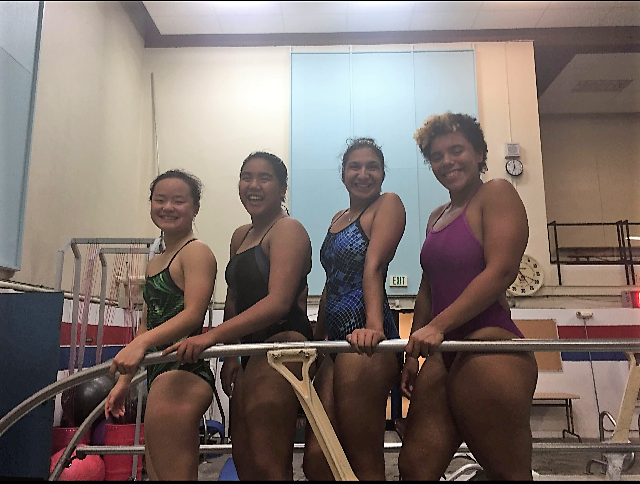 From left to right: seniors Lynn Chou, Jed Go and Tara Saleh and junior Sylvia Hendrix pose post-practice along the diving board.

Since the high school became a 4A team and freshmen now walk the same halls as the upperclassmen, seniors Katie Kirk and Jed Go say they have both seen a change in the atmosphere of the team.

Kirk and Go both said that the daily task of getting up in the early hours for intense physical training can be grueling.

“When asked about swim team, sleep deprivation is the first thing I talk about. We lose a lot of sleep both getting ready for practice and getting there, some of us adding carpooling to that list,” Kirk said.

However, Go said that the harsh environment that they all endure only makes the girls closer with one another as they go through hardships together.

“You’re exhausted all the time but I just love these girls so much,” Go said.

Besides the physical impact of swimming, there was a difficulty within the team regarding the beloved underclassmen. Go said she had always felt love for her teammates but this year she felt a pressure to connect with the younger members, especially as a senior.

“I felt almost intimidated by them,” Go said.

As a role model for the younger swimmers, and with 18 of the team members in their first year on Inglemoor’s grounds, she said it’s imperative that she connects with everyone. That said, with this large addition to the team, it was more difficult than she was used to.

However, Kirk said that carpooling — which has been a time-honored tradition and an integral part of the swim and dive community — has helped greatly in bringing the upperclassmen closer together with their larger freshmen population.

“It’s been so fun to meet all the new freshmen who are coming in. It makes it a lot easier to get closer with them since we can all carpool directly to Inglemoor now and have that time to interact. It also takes a load off of the groups of parents who will sleep in their car for an hour waiting for practice to finish,” Kirk said.