Board games for a rainy day 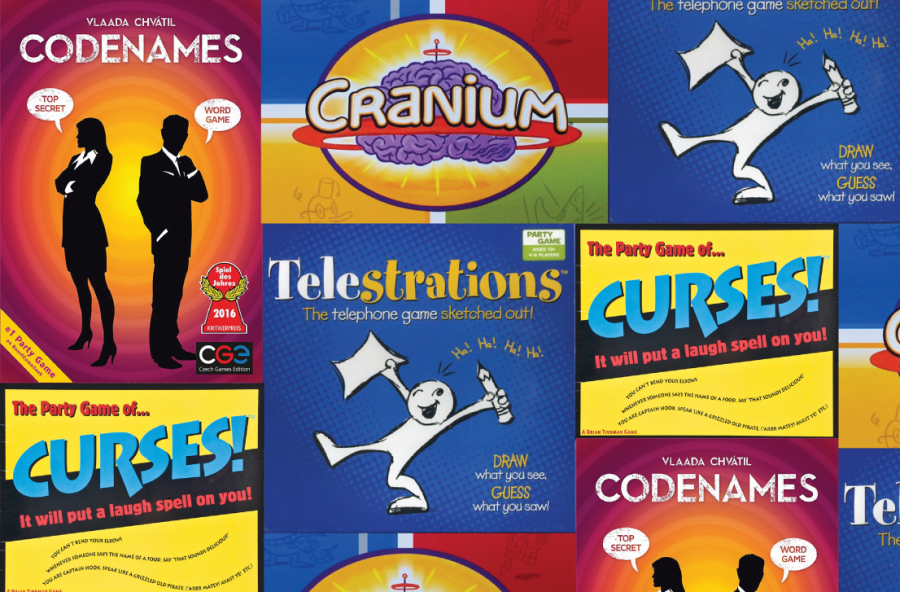 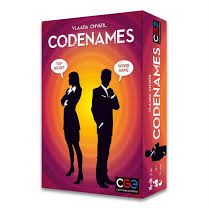 “Codenames” is an innovative new spy-themed game that’s sure to be a hit. Using an answer key that relates to the grid of cards arrayed on the table, one team member gives clues to help their teammates identify which of the cards (each containing a code name) belong to their team while avoiding the ones that don’t. Players can give specific clues to help their teammates identify one individual card or take a risk with a broader clue to pick up several loosely related cards. The game forces players to make connections and rely on intuition, so it’s more fun when players share inside jokes or past experiences. There is also strategy involved in deciding what kind of clues to give in order to win. The most effective clues often come when players think outside the box, and creativity is a must. The concept of “Codenames” is a bit difficult to wrap your head around at first, but that’s really the only downside to the game. Overall, it’s unique, entertaining and well worth the effort required to learn. Verdict: 4 stars
“Telestrations” 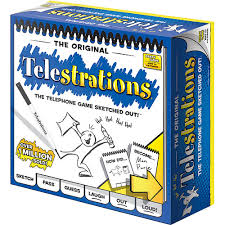 “Pictionary” meets “Telephone” in this enticing game of doodling and guessing. In “Telestrations,” players pass dry-erase notebooks around in a circle, alternating between drawing pictures of their own and trying to guess what the person before them has drawn. The best part of the game is when players share the way their word has changed since the beginning of the round, showing off the drawings and guesses that others made in their notebooks. Usually, the end results range from “nice try” to “not even close.” If a word makes it all the way around the circle intact, players can pat themselves and their friends on the back for superb artistic skills and fantastic guessing. If not, the results are sure to be entertaining anyway, often even more so than when the word reaches the end unchanged. No actual drawing skills are required, and the chunky dry erase pens and time limit help level the playing field between amateurs and artists.  Always good for a laugh, “Telestrations” can be played for points or just for fun, making it the perfect game to pull out whether you’re in the mood for competition or looking for something more laid-back. Children and adults alike will be delighted by this gem of a game. Verdict: 5 stars
“Cranium” 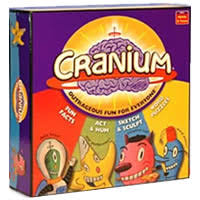 In “Cranium,” teams of players compete to be the first group to reach the end of the gameboard. To do so, they must complete challenges or questions that are sorted into four categories: word worm, creative cat, data head and star performer.  Word worm forces teams to complete challenges having to do with the English language, for instance spelling a word backwards, while creative cat challenges teams to complete a more artistic task such as sculpting an object out of clay. Data head includes general trivia, and star performer requires a flare for the dramatic with challenges like charades or humming a song for teammates to guess. “Cranium” lives up to its slogan of “the game for your whole brain” with diverse categories and challenges, but while it’s enjoyable overall, it does have certain drawbacks. One problem is the game’s length. A full game takes at least an hour to play, deterring many players looking for a quick and casual game. Another issue is the questions in the star performer category. Unless players spring for the latest version of the game, many of the music and pop culture references in this category are outdated, making it more frustrating than fun.  “Cranium” is not a terrible game, but it’s not spectacular either. Verdict: 3 stars
“Curses” 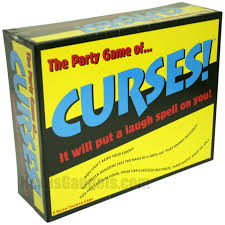 The object of “Curses” is to complete a simple challenge each round: pretend to be a telemarketer and sell something to the other players, explain how you ended up in prison, or give your Oscar acceptance speech. It sounds easy enough, but there’s a catch. You must do it while speaking like a pirate, repeating every word the person next to you says, or keeping your wrists in constant contact with the top of your head. Players play curse cards on their friends and ring the bell when someone forgets to follow their curse. Once a player loses three curse cards, they’re out. Curses can be stacked on top of each other, and the more outrageous the combination the better. The game is funny and lighthearted, but it can be especially amusing when all the players take it seriously and are determined to win. “Curses” is a chance for good-natured rivalry and revenge, and it’s fun to watch the other players act ridiculous as they try to follow their curses. Nearly impossible to play with a straight face, “Curses” is a lively party game that’s sure to entertain. Verdict: 5 stars
All of the games above are available to purchase on Amazon or in-store where games are sold