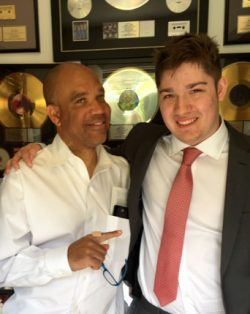 Michael Jackson. Lil Yachty. Migos. For more than five decades, Motown Records has been representing some of the biggest names in music. Their newest team member? Senior Sean Witmer, who was recently accepted as an intern.

Despite having submitted his application somewhat by chance, Witmer managed to beat out fierce competition for the spot.

“One student was from Harvard. Another was from Wharton School of Business at University of Pennsylvania,” Witmer said. “I was amazed that I was the one who got it because people from all around the world were trying.”

Music has been a part of Witmer’s life for years— he began teaching himself guitar at 13. A year later, he had pieced together his first song on the program “Garageband” and has continued to produce music ever since.

“What got me interested in music was watching a documentary on this multibillionaire named David Geffen,” Witmer said. “He launched the careers of Aerosmith, Guns and Roses and the Eagles. When I watched that, I said, ‘I want his job,’ so that’s what I pursued.”

Witmer’s pursuit will soon be taking him almost a thousand miles south to Los Angeles, where Motown is headquartered. There, he will live close to and learn from influential figures in the industry.

“I will be learning this role called A and R– artist and repertoire,” Witmer said. “They’re the in- house talent manager to the band. They develop the band, pick the sound writers, the audio engineers, the producers and they make sure the album becomes a finished product.”

Looking forward, Witmer hopes to help develop bands and eventually even run his own management company. An internship at Motown should be the perfect kickstart to that career, he said, and he’s extremely grateful for the opportunity.

“It just gives me goosebumps every single day when I wake up because I just can’t believe that this happened to me,” Witmer said. “It’s a dream come true.”