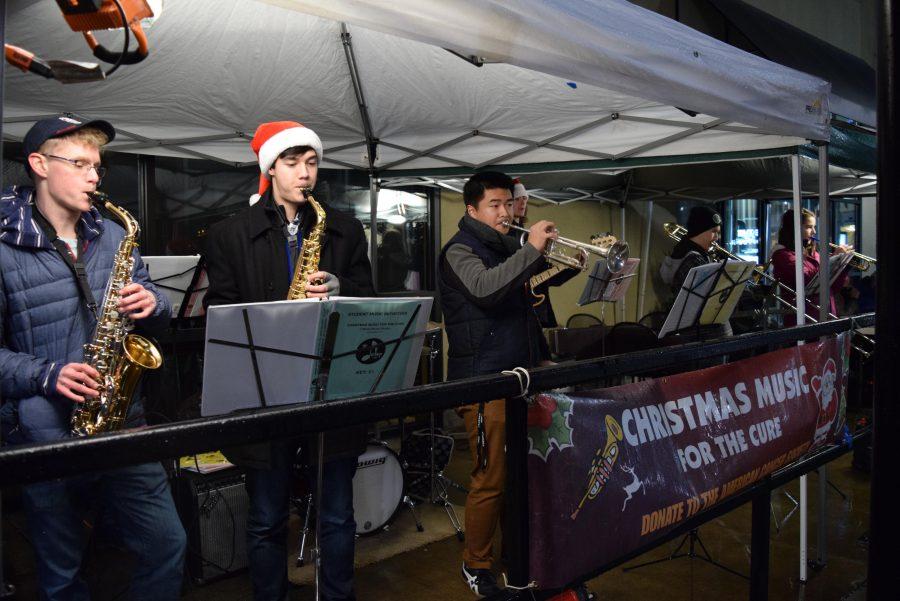 For the past four years, people from the Greater Seattle Area have gathered to participate in Christmas Music for the Cure (CMC), the main event run by a student-led organization, Student Music Initiatives (SMI). At CMC, tens of volunteers dance around in the cold and collect donations for the American Cancer Society while the sound of trumpets and trombones blaring familiar Christmas tunes stops shoppers in their tracks.

“It’s like sub-zero temperatures and it’s fricking freezing outside,” SMI secretary Tara Saleh said. “But I love it when people come together for something that’s not usually thought of as something that can bring people together. I think it’s so cool.”

In the eyes of SMI officers, CMC offers a way to give back to the community. For senior Edward Yang, this year’s executive director, the organization provides an opportunity for students to use their passions to help others.

“Music has played a huge role in my life,” Yang said. “But it was hard to figure out a way that my talents and the talents of my peers could be brought together to make a positive impact on the community in a fun way, and I saw CMC as a wonderful opportunity to make that happen.”

SMI was founded in 2011 and incorporated in 2013 by former Inglemoor students Daniel Briggs, Stuart Wang and Alex Yang as a way to use music to make a difference. Since its creation, the organization has raised around $20,000 and given many students the chance to get involved in something they care about.

“[People] seem genuinely excited to be able to help out their community and volunteer, and I think that’s a really great thing,” SMI vice president Chloe Gelpieryn said.

A tremendous amount of work goes into making CMC a success. As a non-profit that is unaffiliated with the school district, Student Music Initiatives lacks resources that other student organizations have access to, and the officers have to begin preparing early.

“We’ve been planning for CMC for months now, collecting all the materials and making sure that all our connections are in line PR-wise, and it’s probably strengthened my patience,” Saleh said.

But in the end, all of the hard work and cold weather is worth it.

“There are so many people that are fighting battles with [cancer], and they probably feel like a lot of other people don’t realize [their struggles], so it’s nice to see that people care and are trying to make a difference,” junior volunteer Kelsey Duffield said.

The team wants to increase public awareness of SMI and what it fights for. This year, they participated in the Kenmore Tree Lighting and Making Strides Against Breast Cancer, in addition to Christmas Music for the Cure.

“SMI is trying to branch out,” Gelpieryn said. “We really want to make it so people know who we are and what our cause is for.”

Despite its big plans for the future, the officers, volunteers and musicians of Student Music Initiatives want to stay true to their roots of using music to make a difference.

“Even though the concept’s really simple, it’s kind of beautiful,” SMI treasurer Kiran Pradhan said. “Seeing the impact that music itself can have on the community, that’s why I like to participate in Student Music Initiatives.”