“The Fall of the House of Usher” in review 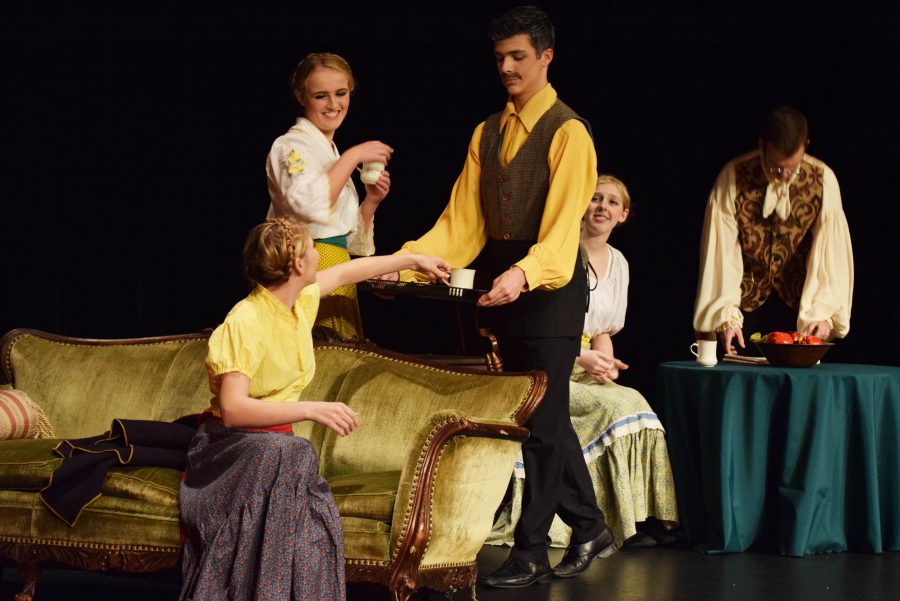 Perfect for the season, “The Fall of the House of Usher” was an experience not characterized by its ability to scare you, but rather through that way it was able to create a sense of discomfort and unease for the audience. Directed by Gretchen Stewart and put on by our very own Valhalla Players, this play explored themes of death and its imminence, mental instability, depression and the notion of humanity.

The scene was set in a tavern, in which a mysterious stranger, played by Senior Simon Jones, and his companion are forced to stay after the companion collapses in the storm that rages outside. Having overheard the discussion among the other guests regarding a premature burial in the town, the stranger then tells his own experience with premature burials. Thus, he begins his tale of the man known as Roderick Usher (Senior Cody Meyer) and his subsequent spiral into madness.

The acting was superb with each character coming to life upon the stage. Meyer sinks into his role as Usher effectively, showing the depths of the depression the man had reacher. The stranger had to slip back and forth between a traumatized man narrating his tale and a man trying his best to save his boyhood friend, and Jones flawlessly switches between the two seamlessly.

Certainly though, the most memorable performances came from the Walls. While confusing at first, it soon became clear that the Walls were a physical representation of the madness and paranoia Usher endured. With all lines spoken in monotone unison, these six Walls, played by Chile Alcorta (Junior), Olivia Anderson (Junior), Jack Engelbrekt (Senior), Lillybeth Held (Junior), Megan Hershgold (Senior), and Hayden Swan (Junior), were probably what contributed most to the creepy atmosphere of the show.

Unfortunately, due to the frequent entrances and exits by the Walls, as well as other characters, sounds like footsteps and doors closing often take the attention away from the action on the stage. Though, I must admit, at times this worked in the production’s favor, creating suspense among audience members when they saw the hooded and masked figures in the dark approaching the stage.

“The Fall of the House of Usher” was not like many of the ‘in-your-face’ horror movies that appear around this time of year. It was much slower, much more chilling and the subtlety with which it is able to affect your emotions makes it more than worthy of a 4-and-a-half stars out of five.