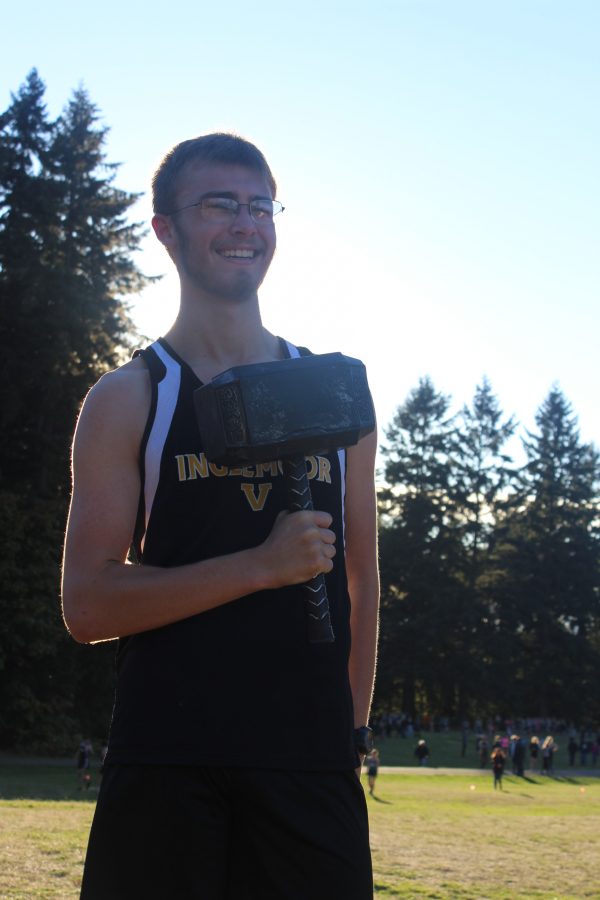 Senior team captain and hammer bearer Michael Dymek carries the hammer during the meet against Skyline and Bothell on Oct. 5. Dymek’s brother had been the hammer bearer in 2013. Inglemoor went on to place second in both boys and girls at the meet.

A thunderous roar of cheering erupted through the air as the cross country hammer bearer raised the hammer high into the air. The legendary weapon has been passed down from year to year between the runners of the cross country team and has become a recognizable symbol throughout the district.

“The hammer is important to the team because it’s where a lot of the spirit comes from,” senior team captain Michael Dymek said.“It’s one of the few traditions we’ve had for so long.”

Even though the hammer has become a significant part of the cross country team and many stories have emerged trying to explain its origins, the true beginnings of the hammer are unknown to many people on the team.

“The hammer started in 2011 with two young men named John Larson and Liam Madden,” coach Kelly Richards explained. “They were seniors on the team, and they went to the movie Thor and decided after watching Thor that our team needed a hammer.”

Since then, the hammer has made a name for itself and become an iconic symbol of the cross country team.

“Everyone from other schools knows about it because we went to Oregon for a meet and this one guy was like ‘Wow, I remember you guys from four years ago carrying the hammer,’” fellow senior team captain Rebecca Ledsham said.

The hammer has become such a respected symbol, other schools have tried to imitate it.

“Skyline tried to copy our hammer last year, and they had a foam sword,” Ledsham said. “It was really, really lame. They raised it up on the podium and it just wasn’t as cool as our hammer.”

For some members of the team, the hammer holds meaning beyond that of just having something to lift on the podium.

“It’s kind of like the team environment: when you see the hammer, we’re all one team and we all have one goal, and that is to compete as a team and do well,” junior Hannah Cottnair said.

That sense of unity has shown to work as well, as the seniors looks towards the future of the program.

“We have a strong core of sophomores and juniors so it’ll be great to see what they can do next year,”  senior Maile Dillender said.

With the closing of the season, two athletes, seniors Rebecca Ledsham and Ethan Karlinsey, will compete at the state competition on Nov. 5 in Pasco.