A new leadership board gives the team a new advantage against opposing teams. 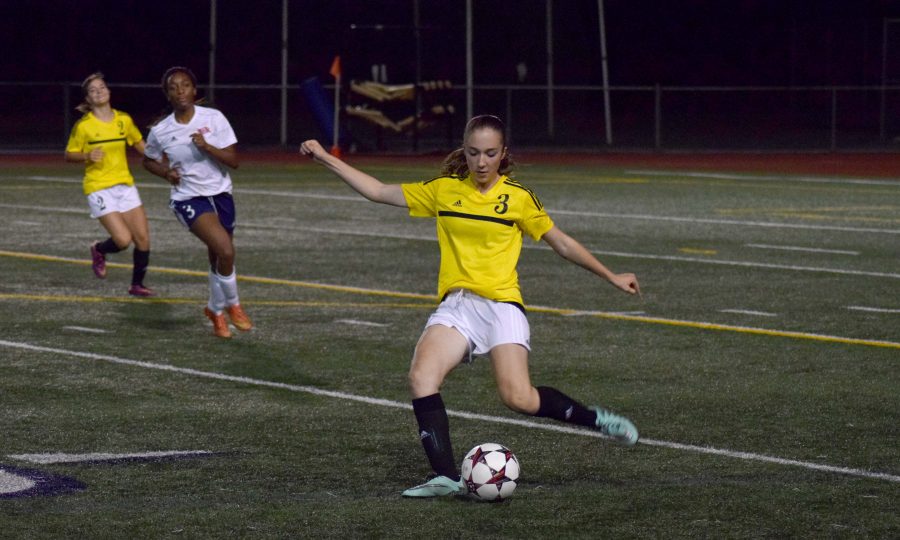 Sophomore Nicole VanEnglen maneuvers the ball away from the Inglemoor goal, maintaining the 1-1 tie with Juanita. Inglemoor girls’ soccer went on to win 1-0 against Newport.

Last year, the girls’ soccer team took third in the KingCo tournament. This year, they are determined to win and progress to the statewide competition.

Before it can play at the KingCo tournament, the team must win “the Pop”, described by junior Kylie Russell as a tournament between Bothell, Woodinville and Inglemoor teams at the Pop Keeney field.

In order to win the Pop, the team must have strong leadership, according to the newly constructed team leadership board, which consists of seniors Saya Brown, Sam Bell and Cat Quintana and juniors Kelsy Berge, Kylie Russell and Maria Matlick, all of whom are considered captains.

“We’re an influence for the younger girls to look up to in terms of play and attitude,” Quintana said.

“They’re the ones that I go to when I need the pace to pick up, when I feel that someone’s getting a little bit down on things,” coach Kent Nelke said.

The leadership board’s main purpose is to make sure the team acts as a unit.

“My personal goal is to figure out good ways to blend the varsity and JV teams together, because in the past we’ve been pretty split up,” Brown said.

According to Quintana, girls’ soccer is not only divided by level of play, but also by club affiliation.

“Everyone plays for different clubs, so we’re just trying to get all of the different clubs into one team, ” Quintana said. “We try to figure out ways we can bond.”

This season, bonding will include Wednesday pasta feeds and end-of-season awards.

However, Matlick claims neither of those are as important as making sure the girls see each other daily.

“One of the most important things is to make sure we actually spend time together,” Matlick said. “We’re having two to three hours of practice five to six times a week right now.”

That practice has paid off this season. Currently, the girls’ soccer team has a record of one loss, one win and one tie.

“I just want to try and be a good leader out there [on the field],” Bell said.

Berge agreed. “I want to get better every day and encourage the younger girls to do the same,” she said.

Anyone wishing to support the girls’ soccer team can cheer the players on as they compete every Tuesday and Thursday. Depending on how well they play, the season will continue well past the KingCo competition in November.