The boys football team is hopeful that offseason team bonding will help them deal with significant absences due to injury. 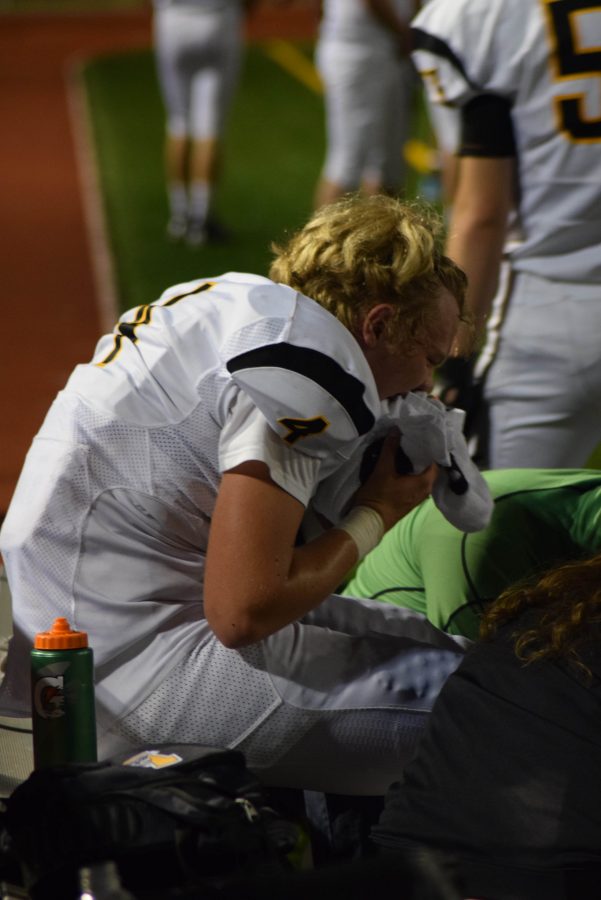 Senior quarterback Brayden Mills sits on the sideline after breaking his fibula and dislocating his ankle during the Vikings game at Lake Washington on Sept. 9. The team has had many injuries this season and hopes that they can succeed despite these setbacks. Inglemoor went on to lose the game 31-21.

After last year’s season, the football team hopes that a new attitude and more experienced players will improve the team’s performance on and off the field. After a string of serious injuries to important players, more positivity and team spirit may be just what they need.

On Sept. 9, in a game at Lake Washington, senior varsity quarterback Brayden Mills broke his fibula and dislocated his ankle after a series of hard sacks.

“[My ankle] popped three times so I knew something was broken, or not where it was supposed to be,” Mills said.

Mills was taken to the hospital, where the team spirit immediately took effect.

In an email to Principal Vicki Sherwood, Mills’ mother Tonya Mills wrote that “So many boys gave up their Saturday and sat with Brayden before surgery and waited for him the entire time he was gone. They were all there to greet him when he was returned to his room.”

Junior Dalton Sullivan will take over the role as varsity quarterback.

“Our offense is kind of tailored to different types of quarterbacks, so he’s done a nice job,” head coach D.J. Baddeley said. “He doesn’t have the experience, but as he plays more he’ll improve and I expect him to play better each week that he goes and gets more experience.”

The tight-knit relationship within the team is largely attributed to strong leadership from the returning players.

“Last year we would get in more arguments, but this year we always say that we play for each other and do it for the team,” Mills said. “This year we are way more unified.  We play as a team more. Everybody trusts each other more.”

According to Baddeley, the improved team rapport proved vital on the field where players must rely on one another. This new approach has positively affected the team on the field in their season opener against Cascade on September 2. The last game was 22-21; however, the team kept fighting until the very end.

“In previous years, if the game started the way it did this year, with two back to back touchdowns, I’d say that team would just roll over,” senior varsity lineman Mario Tupou said. “But we definitely stayed in the game until the end.”

An abundance of returning players should help lead to better results.

“Last year’s team was really young; we had three players who had played in the varsity game the year before and that was it,” Baddeley said. “So we have a lot of returning guys that played significant varsity reps.”

Time will tell whether the team will be able to adapt to these changes. Some difficult games await them with the upcoming conference games against Woodinville on Sept. 30 and Newport on Oct. 7.