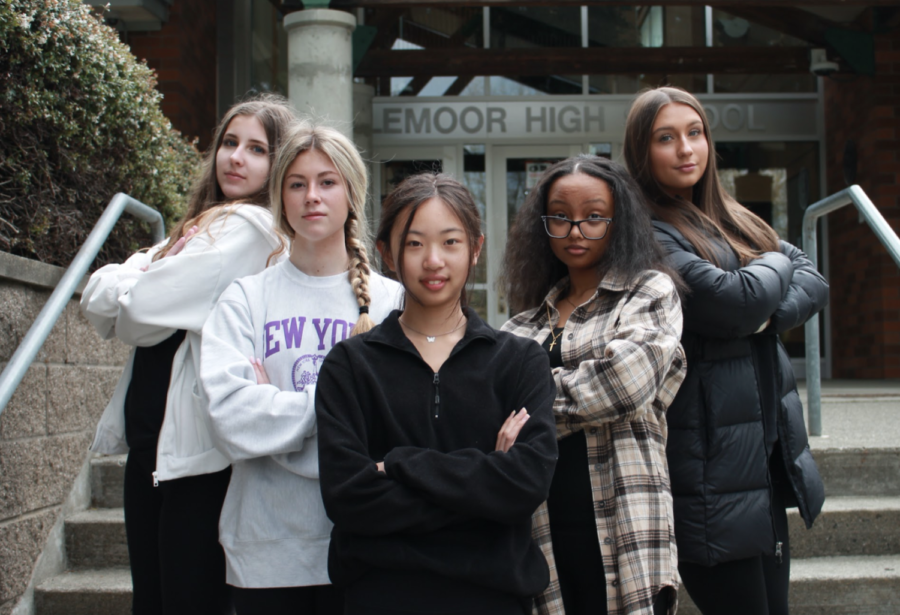 (From left to right) Nicole Chambliss, Bella Iwen, Pinyu Liao, Beamlak Tesfaye and Mikayla Thurman stand in front of the entrance to the school on April 26.

who is currently junior class president, will be in charge of going to monthly board meetings at the district as well as speaking at assemblies and prom. Liao said she wishes she could have continued as both the ASB president and senior class president in the upcoming school year.

“I really liked my team. But then I decided to go towards ASB [Executive Board] because I realized that a lot of the things that I wanted to do related to the ASB exec more than it did the senior class office,” Liao said. “I could bring a lot of the current work that I’m doing since a lot of it has to do with the school climate and have this connection with ASB. I think that’s something that would be really useful and really powerful for all the teams that are involved.”

“Tammi is known for taking on tasks and crushing them with a smile,” said O’Connell. “I’m pleased to hear that Pinyu is the same way because a good leader is able to balance tasks thrown at them, but a great leader seeks out those tasks.”

Junior Vice President-elect Bella Iwen said she makes good connections with other student leaders. She said her involvement with ASB has allowed her to cooperate well and move toward positive change within the school.

“Because the President of ASB is Pinyu, and I’ve been working with Pinyu for the last two years, I think that we make a really good team as President and Vice President,” Iwen said. “ I think that together we can make the school a lot better.”

Junior Treasurer-elect Nicole Chambliss said she is also involved in many leadership positions and she is passionate about helping the school and being a leader. She has been

a cheerleader since her freshman year and has participated in TSA, which she said has helped shape her and given her leadership experience.

“I’ve been involved in a lot of leadership areas. I’ve held leadership positions, and in other clubs. And you know, I’ve always kind of liked being a leader, and I found myself in leadership roles. I like to help people in any way that I can, and I’d love to help the school and I’m excited to do that,” Chambliss said.

Junior Clubs and Activities Representative-elect Mikayla Thurman has been a member of the cheer team since her freshman year as well and participated in Inglemoor’s junior cheer program throughout elementary and middle school. Thurman said being a cheerleader has helped her gain confidence. She said this confidence will help her represent the student body.

“I personally think that I represent the student body pretty well because I am a cheerleader. So I like to support clubs and sports at our school. I’d be a good leader because it just comes naturally for me being in ASB,” Thurman said.

Junior Secretary-elect Beamlak Tesfaye is returning to the team after she spent the 2021-2022 year as the Clubs and Activities representative. She also took over the secretary position after the elected secretary forfeited the position. Tesfaye said she plans to focus on forming a comfortable environment for students and on informing students about different programs.

“I want to start a program that helps students be more informed and more comfortable with their future school environments,” Tesfaye said. “This could look like visiting middle schools and helping 8th graders choose classes in March, seniors giving advice on IB/AP/Running Start to sophomores or setting up college info nights in the fall.”

O’Connell said that Tesfaye’s knowledge from serving as the Clubs and Activities Representative this year will leave the team in good hands next year. She added that she is excited to see how much the school will grow in the hands of the 2022-2023 school year’s executive team.

“[Tesfaye] is consistent, thorough and collected. She’s put up with goofy tangents all year in our meetings before school,” said O’Connell. “I know the school will be in good hands next year—I’m excited to see where they’ll take the Viks!”