The marching band plays the Vikings through a spirited season 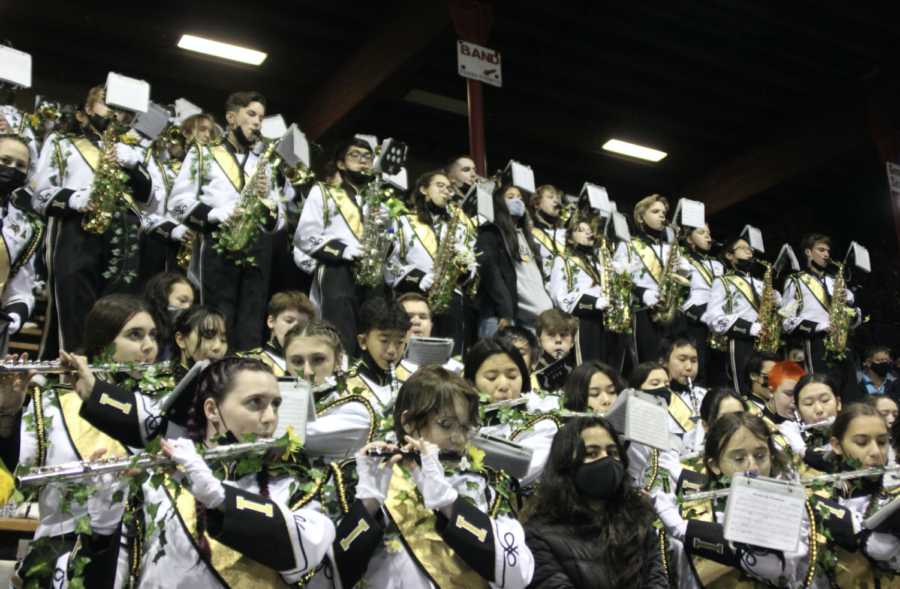 The Inglemoor Marching Band celebrates the start of Homecoming weekend at Pop Keeney.

Fireball by Pitbull, We are the Champions by Queen, and Hey Baby by Bruce Channel are all iconic songs that make Friday Night Lights special for student. Win or lose, the marching band is present throughout every home game at Pop Keeney Stadium playing their own renditions of popular songs.

Drumline and pep band are branches of the overall marching band that perform at home football games in the fall and home basketball games in the winter. They perform with the cheerleaders, providing the music for the fight song.

“[Marching band] is extremely important because they get the crowd going, especially during the fourth quarter,” senior Esha Thakur said “It’s fun to have them hype up the crowd and everyone gets into it.”

Thakur said the environment the marching band creates allows students to bond and appreciate each other along with the game.

“[The marching band] makes us yell louder, makes us cheer more and helps us get into the game more. Overall, they make everyone get together as a school,” Thakur said.

“The band is always gonna be there, no matter what happens at the games and we are going to bring the same energy no matter what. It is important to me what we can do for our audience,” Rasmussen said.

The songs played by the marching band are selected by the band, creating a playlist of songs that are modern enough to be exciting for the student body as well as families in the crowd. They are just as fun to play as they are to listen to, junior Cary Trott said.

“It’s a really fun time, and it’s a great time everytime we do it. Overall my favorite [song] is probably Hey Baby because it’s a tuba feature, and we don’t get many of those.” Trott said. “Or Let’s Groove because it’s just so groovy!”

Let’s Groove, originally played by the band Earth, Wind & Fire, is covered theatrically by the drumline; it is a “sure fire way to get people going,” junior Leah Klots said. “I love how hype the band gets when Let’s Groove comes on. I know that the moment that song comes on, we’re gonna have a good game.”

Although the football season has now ended, the marching band was able to perform fully in person this year during football games. They will perform alongside the cheer team during home games throughout the basketball season, with a variety of new songs.

“It feels very refreshing to have the band back- to have the drumline back in full swing. We are doing what we’ve done before, and it feels great,” Rasmussen said.